According to sources two Indians were nabbed with 74 gold biscuits and three gold bars in all, reportedly smuggled in from Bangladesh 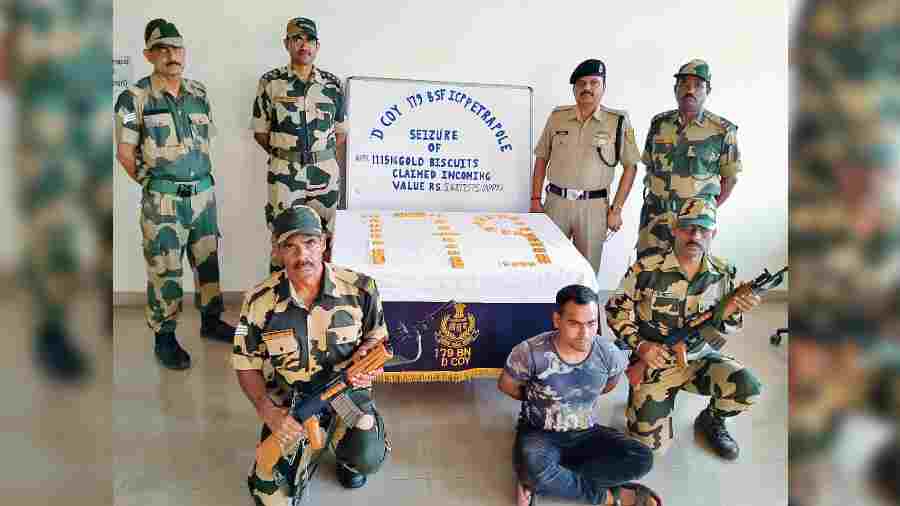 Border Security Force personnel on Monday night seized 12kg of gold worth some Rs 6.15 crore from two separate spots in the Petrapole area of North 24-Parganas.

BSF sources said two Indians were nabbed with 74 gold biscuits and three gold bars in all, reportedly smuggled in from Bangladesh.

The first seizure was made when cargo trucks back from Bangladesh were being checked at the Petrapole land port.

A senior BSF officer said: “When a truck was searched by the team of 179 battalion, a large packet wrapped in black cloth was found from the driver’s seat with 70 gold biscuits and three gold bars.”

Driver Raj Mondal, 26, of Joypur in Bongaon, said one Sahabuddin Mondal, also of Bongaon, had asked him over phone a little before his return to India and had asked him to take a packet from an Indian national.“A man named Pintu reportedly handed over the packet to Raj and asked him to give it to Sahabuddin on Bongaon-Chakdah road. Raj confessed that he agreed to do it for Rs 10,000,” a BSF official said.

Later the same night, a team of the BSF’s 158 battalion seized four gold biscuits from alleged courier at Jayayntipur border outpost, some 4km from the land port. Marub Mondal, 37, was handed him over to Customs in Petrapole. He confessed he took the gold from one Bablu Mondal of Jessore in Bangladesh to hand them over to one Hafizul Sheikh of Jayantipur under Petrapole police station, sources said.

“This is a big achievement by our jawans. We have tightened the noose on every nefarious activity of the smugglers and such a big seizure is a result of this very initiative.”