BJP’s bid to win over farmers with fistful of rice 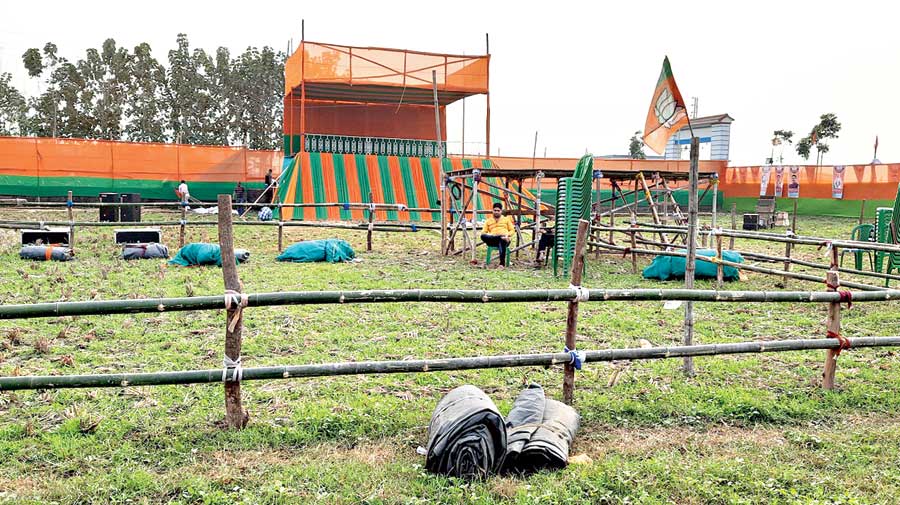 The dais from where Nadda will address BJP workers at Katwa in East Burdwan on Saturday.
Arka Banerjee
Snehamoy Chakraborty   |   Burdwan   |   Published 09.01.21, 12:37 AM

BJP national president J.P. Nadda will visit the homes of five farmers at a remote village in East Burdwan on Saturday to collect ‘ek mutho chaal (a fistful of rice)’ and kick off the party’s drive to reach out to cultivators in Bengal.

The move is aimed at countering the narrative spun by the BJP’s rivals that the Narendra Modi government’s three news agriculture laws would be harmful to farmers.

According to the plan, BJP workers across the state will visit villages to collect a fistful of rice from farmers’ families over the next few months in a symbolic campaign to show that the saffron party cares about cultivators.

“Our national president will kick off the drive and our workers will carry it on across the state from Sunday... We will organise feasts with the collected grains from the farmers at each village,” said Krishna Ghosh, president of BJP’s Katwa organisational district, where Nadda will launch the campaign.

The village to kick off the drive was chosen in East Burdwan as the district is known as “rice bowl” of Bengal as it produces 28 lakh metric ton of rice out of state’s total production of 150 lakh metric ton.

Multiple sources in the state unit of the BJP said the plan to launch such a programme from East Burdwan was aimed at endearing the party to over 72-lakh farmers in the state at a time non-BJP parties were attacking the saffron camp over the ongoing protests in the national capital region against the new farm laws.

“In our campaign, we will highlight how the Mamata Banerjee government has denied farmers the benefits of the PM Kisan scheme by not signing up for the central scheme... This unique initiative will supplement that campaign,” said a BJP source.

The state government has, however, recently informed New Delhi that it will verify the applications of those who registered for the central scheme.

Before collecting rice from five farmers at Musthul village, 8 km from Katwa, Nadda will address the farmers at a rally outside the village and have his lunch at the home of Mathura Mondal, a farmer. Later, Nadda will attend a road show in Burdwan town, to be followed by a news conference.

BJP leaders said the Saturday rally would launch a series of similar programmes —named Krishak Suraksha Sabha — across the state.

Senior BJP leaders said the party had realised that winning over the farmers would be critical in Bengal, an agrarian state.

“The approach will be like a beggar who comes at your door to seek a handful of grains. It will show the respect the party has for those producing food grains for us,” said a BJP leader.

While the BJP is banking on the initiative to connect with farmers, both the ruling Trinamul and the CPM said people of Bengal would call the BJP’s bluff. “This is the party that has given such a raw deal to farmers with the new farm bills.... The BJP leadership does not care about the farmers protesting in extreme weather conditions in Delhi. People of Bengal will not be swayed by this drama and call their bluff,” said CPM leader and All India Krishak Sabha leader Amal Haldar.

Birbhum Trinamul president Anubrata Mondal echoed Haldar and said the BJP’s attempt to connect with farmers would fall flat as the farmers were aware of the party’s priorities.

“Our chief minister Mamata Banerjee knows the real pains of farmers and she has always fought for their rights... People will never forget how she fought for farmers in Singur and Nandigram,” he said.

The BJP’s attempt to bill it as a “unique campaign” and claim that it would put them in an advantageous position in rural Bengal was also contested by some researchers on rural culture and tradition.

Several CPM leaders in East Burdwan accused the BJP of copying them as they had launched a similar initiative in 2015 by collecting a fistful of rice from farmers’ homes.