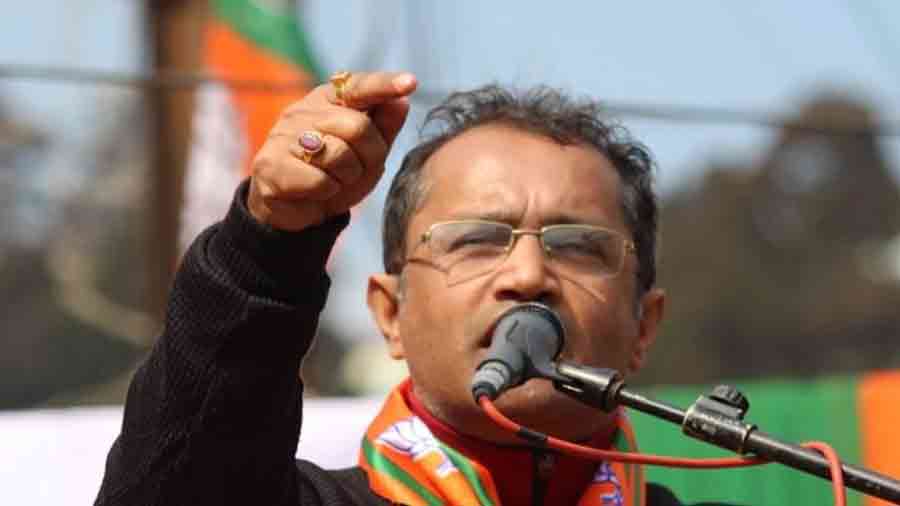 Kurseong BJP MLA B.P. Bajgain on Wednesday demanded on the floor of the Assembly “bifurcation of Bengal” but he didn’t refer to “Gorkhaland” for “diplomatic reason”.

Alipurduar BJP MP and Union minister of state for minority affairs John Barla had said in the past that he would raise the demand of “separate state of north Bengal” at an appropriate level.

Bajgain told The Telegraph that he was seeking the separate state of Gorkhaland when he demanded the “bifurcation of Bengal” in the House.

“Yes, I demanded the bifurcation of Bengal in the Assembly. It does not matter how you touch the nose. The nose is always a nose. In fact, this land was never part of Bengal,” Bajgain said over the phone from Calcutta.

The BJP MLA said he did not use the word “Gorkhaland” for “diplomatic reason”, which he refused to spell out. The legislator, however, said since the Independence of India, “ethnic communities like Gorkhas, Adivasis, Rajbanshis, Koch, Mech, Rava and Toto are facing discrimination in language, culture, economy...”

“That is why Gorkhas and Rajbanshis are demanding separate states. But on February 18, 2022, a Trinamul Congress MLA had said those who talked about separate states would not return home on their legs. I asked the state government in the Assembly today on the kind of action that was taken against the MLA who threatened us,” said Bajgain.

The Kurseong MLA said he did not name Dinhata MLA Udayan Guha in the Assembly but was doing so with the media. Bajgain had in the past written to BJP national president J.P. Nadda demanding the creation of “Gorkhaland”.

While top Bengal leaders of the BJP don’t back the demand for separate states, no action has been taken against Barla and Bajgain. Asked if the state BJP leadership reprimanded him for his statement, the MLA replied in the negative. “I have raised an issue for which I have come here,” said Bajgain.

The Trinamul Congress and the CPM which are against the bifurcation of Bengal have hit out at the BJP for its alleged double standards.

Senior Trinamul leader and minister Firhad Hakim said the BJP wanted to divide Bengal. “He is demanding the division of Bengal while standing in the Assembly. Elected members of the BJP are raising this demand but a section of party leaders tries to downplay it. This is nothing but a double standard from the BJP which wants to divide Bengal.”

CPM general secretary Sitaram Yechury has said: “The BJP has always played divisive politics. Bengal and Punjab have borne the brunt of earlier partitions. But the BJP uses this issue during elections and for propaganda.”

Halim is the daughter-in-law of former Bengal Assembly Speaker Hasim Abdul Halim and the niece of actor Naseeruddin Shah. The bypolls are scheduled for April 12. The counting will be on April 16.