BJP looking for a venue to organise a public meeting in the next 10 days, keeping in mind the Raiganj seat 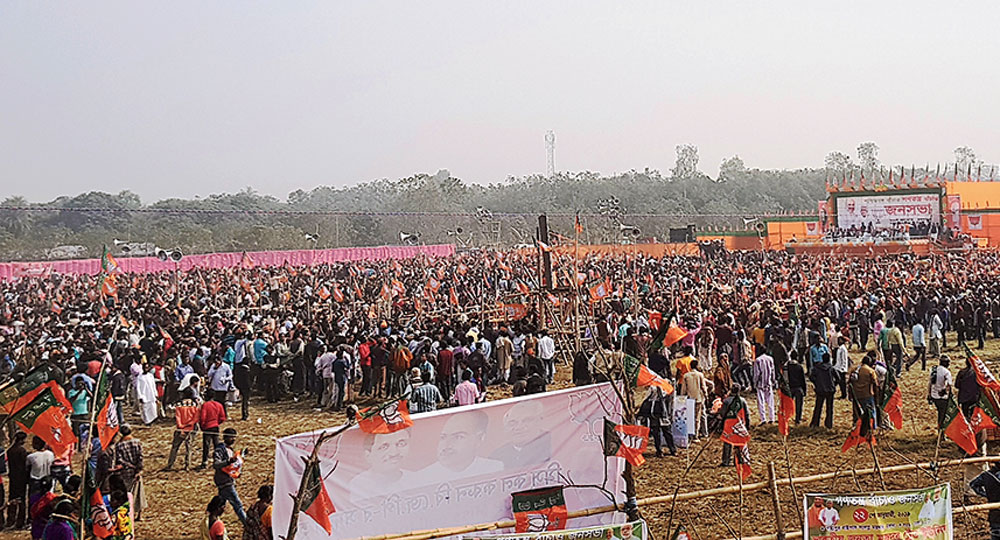 The BJP has decided to hold a series of meetings at block and panchayat levels in Malda district and a rally which might be addressed by Uttar Pradesh chief minister Yogi Adityanath in North Dinajpur district, buoyed by the purported crowd of around 1.5 lakh to hear Amit Shah in Malda on Tuesday.

“The overwhelming presence of people at Tuesday’s meeting addressed by Amit Shah has bolstered the confidence of our workers. It has been decided that meetings will be held in blocks and panchayats, where video clips of the Malda rally and the speech by Shah will be played. We want more and more people to know about our party,” said Sanjit Mishra, the Malda district BJP president.

Trinamul has already decided to hold a rally on January 30 at Nityanandapur near Malda, the same place BJP national president Shah addressed the meeting.

“The BJP had brought in people from neighbouring districts and Bihar and Jharkhand for Shah’s rally. We will prove our strength at the same venue on January 30. Our leader and state minister Suvendu Adhikari will be present at the meet,” said Moazzem Hossain, the Trinamul Malda district president.

In the 2016 Assembly polls, the BJP had won Baishnabnagar seat in Malda district.

Shankar Chakraborty, the North Dinajpur district BJP chief, said the leadership had given a directive to find a venue to organise a public meeting in the next 10 days, keeping in mind the Raiganj Parliament seat.

“The party plans to bring in Uttar Pradesh chief minister Yogi Adityanath and some other central leaders to the rally. Our leaders have started visiting prospective locations from Wednesday. We will prove our strength the way the party’s base was showcased in Malda yesterday(Tuesday),” said Chakraborty.