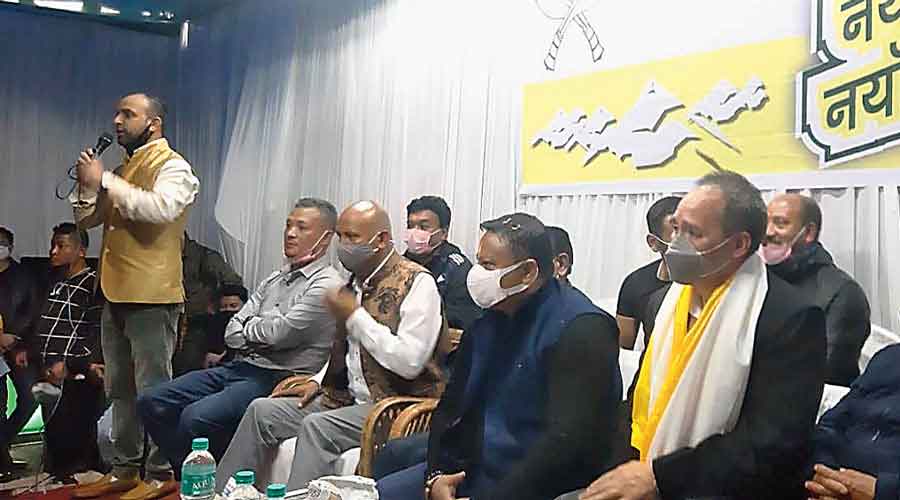 Tilak Chand Roka (sitting second from right) at a meeting of the Anit Thapa faction of the Morcha in Darjeeling on Sunday.
Telegraph picture
Vivek Chhetri   |   Darjeeling   |   Published 26.07.21, 01:37 AM

Tilak Chand Roka, a well-known face in Darjeeling politics who had joined the BJP early this year, switched sides to the Anit Thapa-headed faction of the Gorkha Janmukti Morcha on Sunday and asserted that the hills had given “everything possible” to the saffron party and it was time for the BJP to honour its commitment.

Roka’s statement comes close on the heels of a similar remark by Ajoy Edwards, a leader of the GNLF which is an ally of the BJP. “The party even handed over the Darjeeling (Assembly) seat to them. It is time for the BJP to deliver and even Darjeeling MP Raju Bista is aware of the deliverance quotient,” Edwards had said.

These developments in the hills suggest that the BJP which is half way into the current Lok Sabha’s five-year tenure is now slowly being pressured by hill politicians and even its allies to deliver on their promises.

The BJP had in its 2019 Lok Sabha poll manifesto promised a “permanent political solution” for the region and tribal status for 11 hill communities.

Edwards had also noted that the BJP had talked about “minimum wages” for tea garden workers before the Lok Sabha elections.

Roka, a former elected Gorkhaland Territorial Administration Sabha member and also an advisor to the tea garden trade union of Bimal Gurung’s Morcha, on Sunday said that he had decided to support the BJP before the Lok Sabha elections “as it was the need of the hour and to prove the hill people’s support to the BJP”.

“We, the people from the hills, Terai and the Dooars, have done whatever we could. We have elected the BJP leader and taken our issue to Parliament by exercising our franchise. It is now the responsibility of the BJP to deliver on its commitments,” said Roka in Darjeeling soon after joining the Morcha faction.

The hill people have elected BJP leaders to Parliament since 2009. In fact, Darjeeling also elected a BJP MLA in 2019 and 2021 while BJP candidate from Kurseong, B.P. Bajgain, won from Kurseong this year.

Despite the BJP garnering the major chunk of the vote share in the hills, many are upset that the party has not delivered anything concrete vis-à-vis the two demands mentioned for the region in the manifesto.

“The BJP has to deliver,” said Roka.

Even Edwards had said that if the BJP failed to deliver, the GNLF would be compelled to look otherwise. Edwards, however, sounded hopeful that the BJP would live up to its commitment.

Kalyan Dewan, president, BJP (hills) did not answer calls to his phone.

Anit Thapa reached Darjeeling where he plans to camp to strengthen the party.

Roshan Giri, the general secretary of the Bimal Gurung faction of the Morcha, challenged Thapa to float a new party.