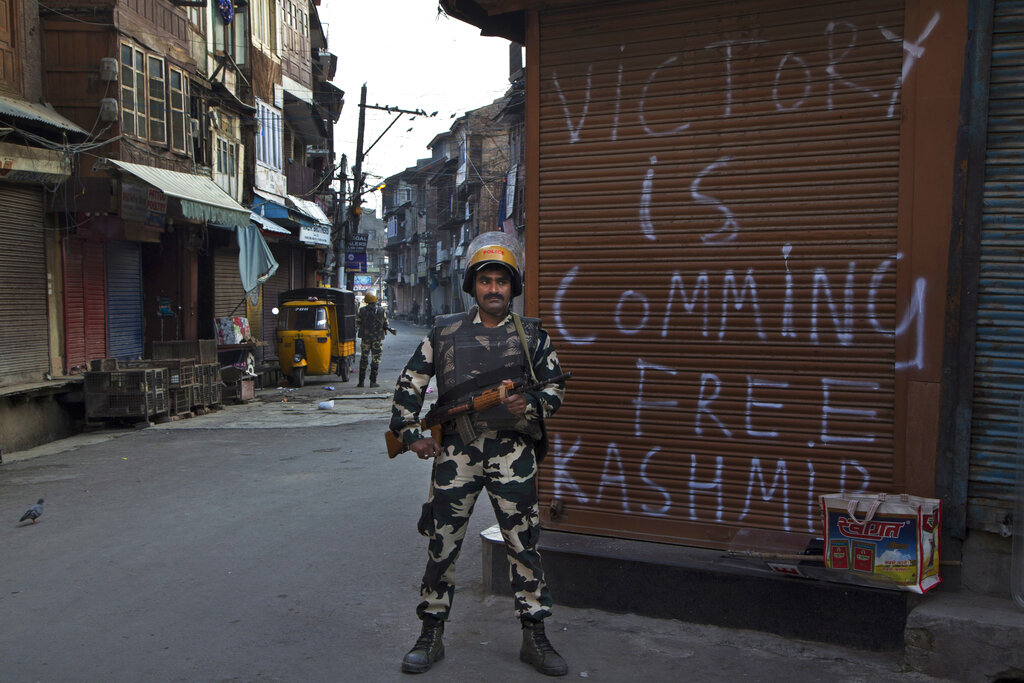 Nayagram natives Zulfikar Sheikh, 38, and Hyder Ali, 36, were arrested on suspicion of links with militants and allegedly harassed by security forces during their 28 days in custody.
AP
Snehamoy Chakraborty   |   Bolpur(Birbhum)   |   Published 01.11.19, 07:45 PM

Kashmir horror stories of two labourers from Birbhum’s Nayagram in 2014 had not been a deterrent to many in the Bengal district so far, but the Kulgam carnage might change that.

Birbhum still has around 50 of the 131 Bengal workers in the Valley that the Mamata Banerjee government is trying to bring back. The group of 131 includes 50-odd from Nayagram.

Nayagram is 95km from the Birbhum district headquarters in Suri. Around 60 per cent of the men in the hamlet’s 1,200 families leave home to work in other states as day-wage labourers, mainly in Jammu and Kashmir.

Nayagram natives Zulfikar Sheikh, 38, and Hyder Ali, 36, used to go to Kashmir every year till 2014 to work in apple orchards.

That year, they were arrested on suspicion of links with militants and allegedly harassed by security forces during their 28 days in custody.

Sheikh and Ali were released after the probe found them innocent but the ordeal forced them to leave the Valley forever.

“We were in Kashmir’s Baramulla in 2014. A group of cops in plainclothes came to our tent and caught me and Hyder. We were taken to several police stations and military camps. We were tortured. They wanted us to identify a few faces we had never seen. We requested them to check with the Bengal administration for our identities but they did not listen,” said Zulfikar.

“We were released after a cultural organisation, Bangla Sanskriti Mancha, sent people there and spoke to the police,” he added.

After returning home, Zulfikar and Hyder told villagers about the torture and requested them to never consider going to Kashmir for work. But nobody paid heed then. “There is no work here and people are forced to go to Kashmir in the off-season,” said Zulfikar, who now works as a mason in Asansol. Hyder works as a mason in Tamil Nadu and Kerala.

After the Kulgam carnage on Tuesday, though, Nayagram appears to have had a rethink. “We knew what happened with two of our villagers but there was no alternative to sending my son to Kashmir…. Police atrocities are one thing but being summarily killed like this is a whole new world of fear. I will never let my son go there again,” said Jahangir Sheikh.

Nayagram villagers said they usually went to Kashmir during the off-season on Bengal’s farms as they can earn Rs 600-700 per day there. The alternative is around Rs 200 for similar work in Bengal. “There is no industry around stone mines and rivers in our area…. The work under the 100-day rural employment scheme is not enough to run families,” said Mohammed Ali Reza, a former chief of the Muraroi II panchayat samiti.

Leaders of the Sanskriti Mancha said they had tried, before the Kulgam incident, to convince people not to go to the Valley for work. “We often requested the villagers not to go to Kashmir, especially after the torture of Zulfikar and Hyder, but they continued taking the risk,” said the Mancha’s Samirul Islam.

Trinamul leader Bikash Roy Chowdhury, chief of the Birbhum zilla parishad, said they would look into the specific job-related problems of Nayagram. “We are going to speak to the people there.”