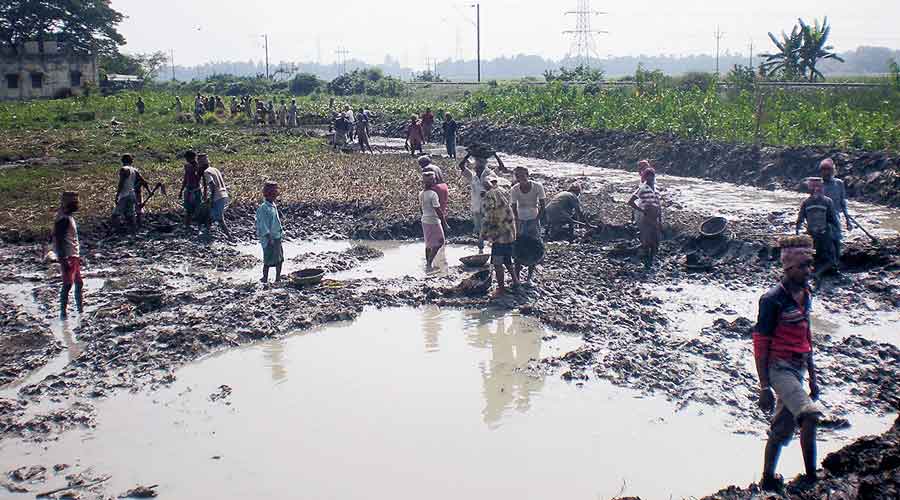 The Mamata Banerjee government has written to the Centre with a plea to approve 8 crore more mandays under the 100-days’ job scheme for Bengal in the current fiscal after the state achieved its approved labour budget of 27 crore mandays.

“The Centre has so far approved creation of 27 crore mandays for the 2021-22 financial year, which is insufficient for a state like ours. We have written to Delhi with a request to approve additional eight crore mandays to meet the state’s demand of 35 crore mandays. Even though the central government has cut down outlays on MGNREGA for 2022-23 in comparison to what it has spent this year, we would stick to our demand,” said Pulok Roy, the state panchayat minister.

Sources in the panchayat department said the Centre had initially approved a labour budget of 22 crore mandays for Bengal in the ongoing financial year. Because of heavy demand of work under the scheme in the backdrop of the Covid-19 pandemic, the state achieved the target by October last year.

On request from Nabanna, the Union government approved another 5 crore mandays. But they, too, were exhausted by December last year because of heavy demand of jobs.

As there was demand of jobs, the Bengal government continued the work even after 27 crore mandays were exhausted in anticipation that the Centre would approve more labour budget or mandays for the state.

As the Centre was yet to sanction fresh labour budget, the state is facing a problem as 4.01 crore mandays have already been created over the approved budget of 27 crore. As these mandays are yet to be sanctioned, the state is yet to pay a sum of Rs 826 crore to the job card holders.

Chief minister Mamata Banerjee also expressed her concern over the curtailment of allotment for the MGNREGA scheme during an administrative review meeting in Calcutta on Thursday.

“You saw they (central government) cut the allocation for 100 days’ work (MGNREGA). West Bengal was the first in the country in the MGNREGA. Last year, we could provide 52 days of work to each person in our state and this year, it is only 42 days so far,” said Mamata on Thursday.

In the Union budget this year, the Centre allotted Rs 73,000 crore for the rural job scheme, which is 25 per cent lower than Rs 98,000 crore, the revised estimate for the plan in the current fiscal.

During the pandemic, the state government had issued around 4 lakh new job cards, mostly to labourers who returned from other states.  Although a section of migrant workers started moving to their workplaces outside Bengal, there is still a demand for jobs in rural areas amid the spike in prices of commodities.

“It becomes a headache for us if we can’t give wages to labourers after work. So, it is better to go slow with the MGNREGA,” said a district magistrate in south Bengal.
In the last financial year, the central government had allotted 41 crore mandays for the state.