Worked hard to get nod for projects, but they were never approved, says former minister 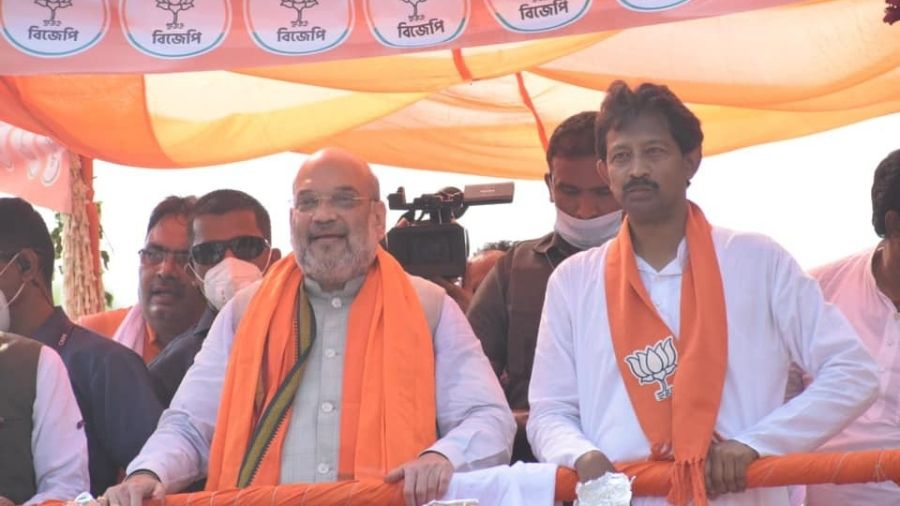 Former minister Rajib Banerjee, considered to be one of BJP's prized scalps in its quest to assume power in Bengal, alleged that he was relegated in the TMC for opposing "cut money culture" and had to face "step-motherly" treatment throughout his second term, which ultimately prompted him to sever ties with the ruling party.

Banerjee also mocked the Trinamul Congress government for promoting the state's numero uno position in implementation of the MGNREGA, contending that the distinction is testimony of the lack of jobs for the youth of Bengal.

The former forest minister, once a key figure in the Trinamul Congress, said he had considered retiring from active politics, but took up the challenge to contest in the Assembly elections with the hope that the BJP will usher in a new era of development in the state.

Banerjee, 51, who switched over to the saffron camp in January, is vying for a third term from the Domjur constituency, where he has won twice as a TMC candidate since 2011.

Referring to his "bitter experiences" in the Backward Classes Welfare Department, Banerjee said he had once received a complaint of irregularity in distribution of cycles among students under the 'Sabuj Sathi' project, and flagged it to the chief minister's office.

"The result of pointing this out was I was removed from the department, as I tried to put an end to the cut money culture," the former Backward Classes Welfare Department Minister told PTI in an interview on the sidelines of hectic campaigning.

Accusing the TMC dispensation of not clearing files for development projects for his constituency, Banerjee claimed that he was shunted out of every ministry that he headed whenever he tried to come in the way of vested interests of a section of senior officials and party members.

"I had worked hard to get the nod for drinking water projects in Domjur, but then, a Rs 33-crore proposal for free water connection to households was not approved. The local TMC administration is now demanding money from people to go ahead with it. I wanted to execute the project without charging a penny," he said.

Attacking the TMC government over its "failure" to create job opportunities, Banerjee sought to punch a hole in the ruling party's poll plank of securing the top spot for implementation of the 100-day rural job scheme, declaring it as "a reflection of Bengal, a failed state".

"There are over 5.5 lakh vacancies in state government departments, and no efforts were made to recruit people for the posts. Instead, the TMC dispensation hired a few thousand contractual workers.

"People do not have jobs, and that is why they sought work under the MGNREGA scheme. Youths are leaving the state," Banerjee, who holds an MBA degree, said.

Asked about allegations that he enjoyed all the power and perks of his position before ditching the TMC prior to the elections, the former Irrigation Minister said people of the constituency are well aware of his development work in the area.

"Let the TMC leaders say whatever they want. People will decide on April 10 (the day of polling in Domjur)... I know they will not disappoint me, said Banerjee, who is believed to have considerable influence in several seats of Howrah district.

The TMC turncoat, however, maintained that he had immense respect for TMC supremo and Chief Minister Mamata Banerjee, and had to desert the party with a heavy heart as he was cornered.

"Unfortunately, I was not allowed to work independently in the second term and sidelined in the party. I had to face personal attacks for airing grievances against a section of top leaders.

"I was also meted out a step-motherly treatment ever since winning from the constituency with more than one lakh votes for a second term in 2016," he claimed.

Banerjee also took a swipe at TMC's 'khela hobe' (game will happen) poll slogan, insisting that such a discourse by the ruling party shows it has become politically bankrupt.