Bengal pads up for war on omicron: Authorities asked to hike tests 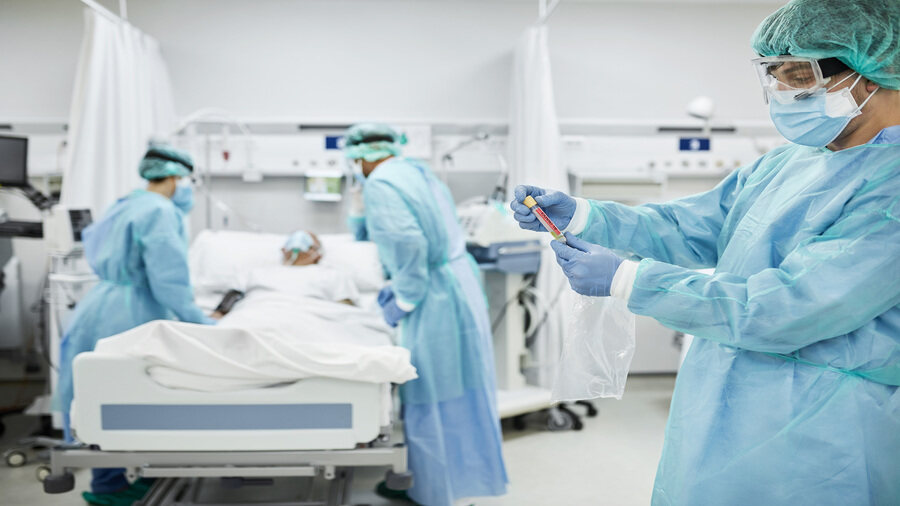 The Bengal government has directed the district magistrates to upgrade healthcare facilities to the levels achieved during the second wave of the pandemic in May, amid fears that the omicron variant might drive a fresh spike in cases over the next “25 to 30 days”.

During a meeting with DMs and other senior officials on Friday, chief secretary H.K. Dwivedi told them to lay stress on readying public and private hospitals that had acted as dedicated Covid units during the second wave or had set aside beds for coronavirus-infected patients, spruce up testing and ensure that those whose second vaccine doses were overdue take the jabs.

Officials said there was an apprehension that demand for hospitalisation would increase within weeks as the highly contagious omicron strain runs through the population.

“It is apprehended that 10-12 lakh people could be infected everyday across the country during the peak of the expected third wave. Although initial research from multiple countries suggests that omicron may be causing milder disease than the earlier variants, we have to be ready as the pool of infected people could be larger, pushing up demand for hospitalisation,” an official said, recalling that India had reported over 4 lakh daily cases during the delta-driven peak earlier this year.

Sources said that although Bengal now officially has 23,947 Covid beds, a number similar to that during the second wave, the actual picture could be different as some of the hospitals earmarked by the government for Covid treatment had been released as cases steadily declined over the past few months. Beds set aside for Covid patients might also have been opened to others, the sources said.

“The chief secretary told the DMs to ensure that these hospitals are up and running once again,” an official said.

The chief secretary is also said to have directed focus on increasing testing once again.

“During the second wave, the state had on days conducted 63,000 tests. That figure has almost come down to half now. The chief secretary wanted the DMs to ensure that the number of tests are stepped up immediately,” an official said.

The government also directed the DMs to see to it that those who were due for the second dose of Covid vaccine rolled up their sleeves for jabs so that the eligible population could be inoculated without delay. Till Friday, 6.42 first doses and 3.68 second doses had been administered in the state.

“They should be made aware that within 25-30 days, a fresh wave of the pandemic is expected.… So, getting the second dose of vaccine is very important,” a DM quoted the chief secretary as saying.

A section of officials said that as a third wave seemed unavoidable, the state government should reconsider its decision to lift the nocturnal restrictions in the run-up to Christmas and New Year.

“As thousands of people are already converging at Park Street, unmindful of Covid protocols, it could light the spark for the third wave in the state. The government should re-visit its decision to lift the night-time restrictions that were in place between 11pm and 5am,” an official said.