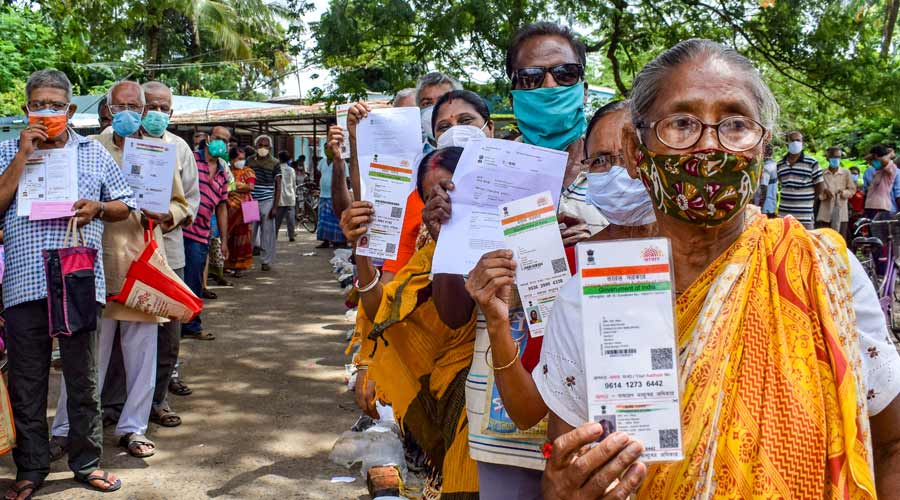 Beneficiaries show their Aadhar card and ragistration form wait in a long queue to receive a dose of COVID-19 vaccine at a vaccination centre in Nadia on Wednesday.
PTI Photo
Our Special Correspondent   |   Calcutta   |   Published 16.07.21, 01:40 AM

Bengal on Thursday reported the 25th consecutive day of a drop in total active Covid-19 cases as the state logged 1,089 recoveries, 891 infections and a dozen deaths.

With Calcutta logging 76 infections and North 24-Parganas 92, Thursday was the eighth successive day since the second wave struck when not one of Bengal’s 23 districts reported a three-digit figure of new cases.

“Even about six weeks ago, the daily death toll was around 150, with some districts reporting 40-50 deaths each. We have come a long way since,” said a minister.

In the key parameter of case growth — percentage of growth of cases over the past week compared to the week before that — Bengal is 24th on the list of states, with case growth falling by 47.8 per cent. Bengal has been able to maintain a case growth of –40 to –60 for weeks.

The state now has a total of over 15.15 lakh Covid-19 cases, since the first was detected in March last year. It includes nearly 14.84 lakh recoveries.