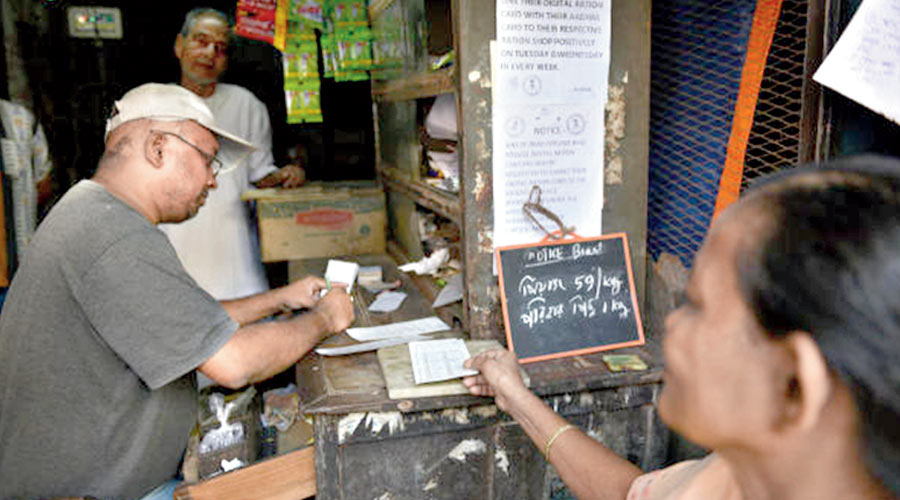 The Mamata Banerjee government has decided to give free foodgrains to migrant workers living in Bengal under the “one nation one ration card” programme.

“The Centre provides rice at Rs 2 kg and wheat at Rs 2 a kg under the National Food Security Act. The Bengal government gives further subsidy to provide free of cost food grains to 6.01 crore beneficiaries in the state. Now onwards, those who have migrated to Bengal in search of work would also get the benefit,” said a senior government official.

The move, sources in the government said, has been initiated to send a message across the country.

“The state government claims it runs the maximum number of welfare schemes in the country. The ruling party is set to highlight it ahead of the 2024 Lok Sabha polls to attack the BJP. Extending the benefit of the free grains scheme to migrants is the first step towards the goal,” said a source.

A Trinamul Congress insider said if migrants coming to Bengal got the benefit of the scheme, the word of mouth publicity would establish the credibility of the free food grain scheme, which would result in political gains for Trinamul, especially Mamata Banerjee.

“These migrants could be our unpaid PROs in other states, particularly when we are trying to focus on the BJP’s anti-poor track record.... We would also campaign that similar schemes would be launched across the country if the BJP is removed from power and the Opposition is given a chance to run the central government,” said a minister.

However, there is no official estimate about in-migrants (those who come to Bengal in search of jobs) to the state.

“During the nationwide lockdown last year, the state had estimated that over 1 lakh migrants from other states were stuck in Bengal. But there is no official estimate about the number of migrants living in Bengal.… Besides, Bengal is now more an out-migrant state as more people leave the state in search of jobs,” said a source.

The Trinamul insider said the government was worried about the number of migrants living in Bengal as its main objective was to ensure that they told their friends and families about the scheme when they went back home. “The human face of the Mamata Banerjee government should be known to people outside and that objective would be achieved,” said a source.

According to the one nation one ration card programme, any NFSA beneficiary would be able to withdraw his or her allotted foodgrain from any of the ration shops in the country. That is why Aadhaar cards of the beneficiaries were seeded with their ration cards.

Bengal had not joined the scheme initially as the chief minister was reluctant to share biometric details of the beneficiaries from the state with the Centre in the backdrop of the Citizenship Amendment Act.

The situation, however, changed after Trinamul came back to power in May and Bengal joined the scheme.

“We will also highlight that while migrants in Bengal are getting free foodgrains, those who leave the state will have to pay for the food grains. The contrast will be clearer then,” said a Trinamul minister.