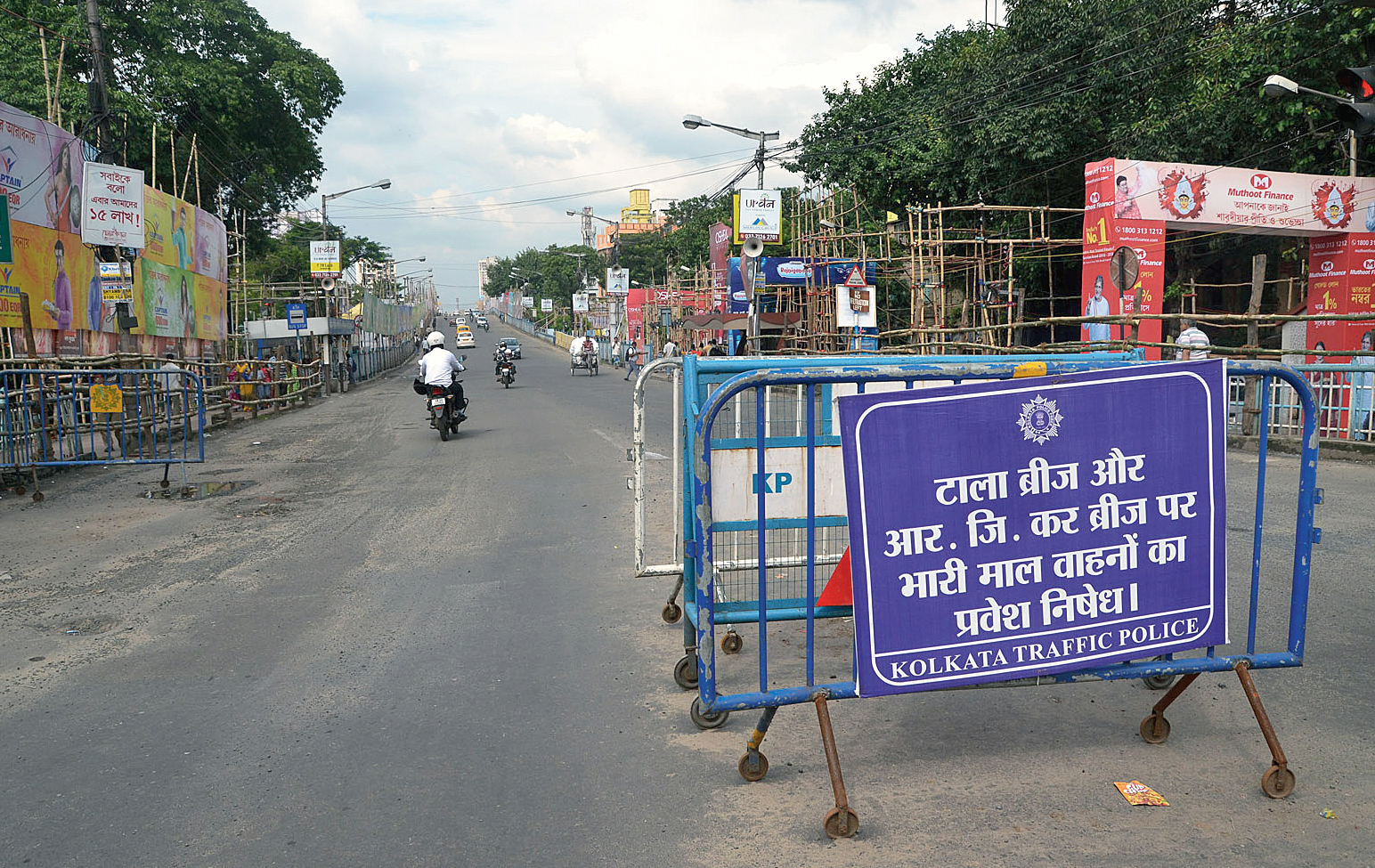 A signboard near the Tallah bridge that reads no heavy vehicles will be allowed on the bridge and the RG Kar bridge.
Picture by Sanat Kumar Sinha
Kinsuk Basu   |   Calcutta   |   Published 30.09.19, 10:24 PM

The state government wants to run buses and minibuses on the Tallah bridge till October 11 but engineers have warned that it could prove disastrous and the structure might collapse.

A meeting has been convened on Tuesday at Nabanna where senior officers will be discussing whether the ban on buses and minibuses will stay or slight adjustments can be made for public convenience.

The decision to convene the meeting was taken after a section of police said it might get difficult managing traffic during the festive days when smaller vehicles would be on the roads in greater number.

Cops fear that the cars will end up jostling for space with buses and minibuses along the diverted routes.

The meeting will take into account a report from Lalbazar on the extent of congestion that commuters, who are taking the diverted route in the wake of ban on buses and minibuses on the Tallah bridge since Monday, will have to battle to reach their destinations.

This finding will be pitted against a report from RITES on the health of the bridge before arriving at a decision. Lalbazar has been asked to draw up a report for the meeting.

Senior officers in the government said Tuesday’s meeting was necessitated after the police pleaded for a “concession” on the ban to help in managing traffic on the festive days.

But engineers from the PWD, railway and the RITES insisted that the bridge was in no condition to bear vehicular load over three tonnes. Even movement of pedestrians in big groups is risky.

“There is no confusion over the health of the Tallah bridge and its condition. By now engineers from all the departments are aware how bad the condition is,” said a PWD engineer.

“Someone has to be accountable if there is a disaster after vehicles are allowed to ply on the bridge. We have made it clear that the structure is not suitable for plying of buses and minibuses,” he said.

Sources in Nabanna said the government was keen on finding a middle path after complaints kept pouring in about the punishing wait for commuters along diverted routes.

The cascading effect of diversion was felt as far as VIP Road in the north and Bally bridge in the west, where vehicles crawled. Senior police officers said the situation could worsen on the festive days.

Senior engineers from the RITES, including the general manager and the design head, was present along with PWD’s chief bridge engineer, mayor Firhad Hakim, PWD minister Aroop Biswas and transport secretary N.S. Nigam.

“If the ban continues, there will be no immediate respite for commuters,” said a senior police officer at Lalbazar.

“We are trying to coordinate with Barrackpore and Bidhan Nagar police commissionerates. Police deployment may be increased along the routes but road space can’t be increased,” he said.