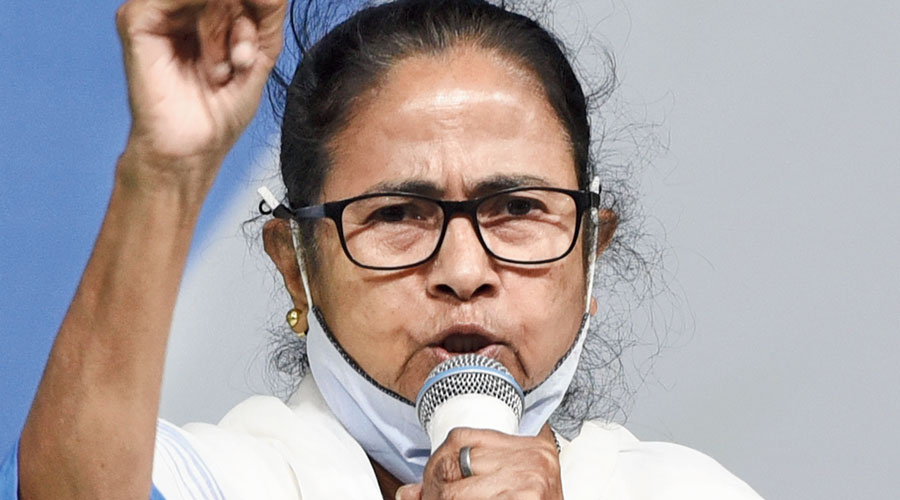 Chief minister Mamata Banerjee on Saturday dared the BJP-led Centre to send the National Human Rights Commission to Tripura over attacks on her party supporters “every day”.

Her reaction came on a day a Trinamul joining event in Badharghat, 6km from Agartala, was attacked by suspected ruling BJP members, leaving three Trinamul workers injured. Three Trinamul student activists also received minor injuries at a college in Unakoti, some 150km from Agartala, when they were celebrating the foundation day of the Trinamul Chhatra Parishad.

“Will you send teams of National Human Rights Commission only to Bengal? Why were such teams not sent to Tripura...? Our people are attacked by goons there every day,” she said.

Mamata alleged in her virtual address from Calcutta that even cops posted for the security of Trinamul leaders had not been spared. “They received injuries and were not allowed medicines or injection,” she said.

She reminded BJP leaders that they did not allow her MPs to visit Assam during the NRC protest there.

Her nephew and Trinamul all-India general secretary Abhishek Banerjee warned the BJP that Trinamul would come to power in Tripura in 2023.

“The allegations are baseless and have been made only to remain in the news,” Tripura BJP spokesperson Bhattacharyya said. “It has been over a month but Trinamul has not been able to form the state committee. Nobody knows who is in charge. This reflects the actual strength of the party (in Tripura),”he added.

At Badharghat, the attack “by 15-20 armed BJP goons” was carried out at the house of Trinamul member Mujibur Islam Mazumdar 20 minutes before the joining event, senior party leader Subal Bhowmik in Tripura said. The injured were identified as Mujibur, Rony Mia and Subhankar Debnath. Subhankar was flown to Calcutta in the evening for treatment.

Earlier in the day, Trinamul in Agartala also took out a 6km rally attended by Trinamul MP Santanu Sen, which flagged spiralling prices, unemployment and worsening law and order.

The BJP came to power in Tripura in 2018 defeating the Left Front. Trinamul has intensified its activities in Tripura with an eye on the 2023 Assembly polls.