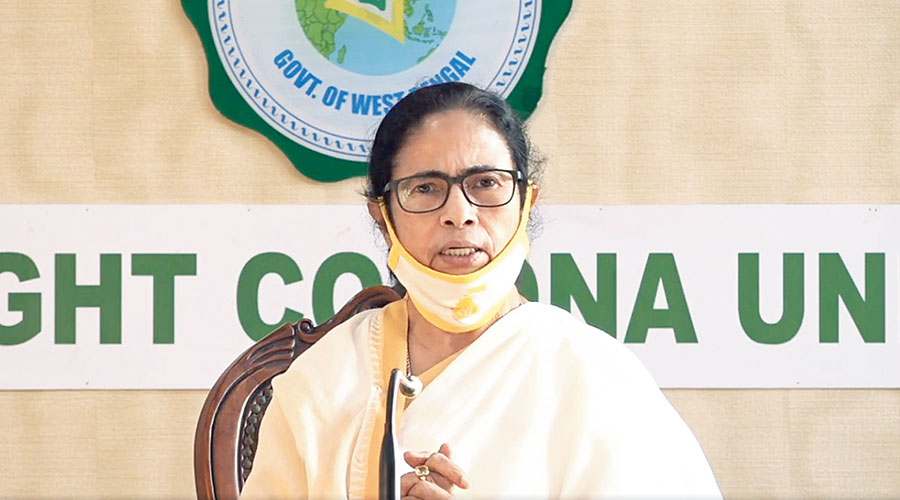 Mamata Banerjee on Tuesday said during a videoconference of chief ministers with Prime Minister Narendra Modi that the Bengal government was ready with manpower and infrastructure to carry out Covid-19 vaccination as soon as vaccines were available in India.

“We have the needed infrastructure and manpower in place,” an official quoted the chief minister as saying during the meeting that discussed the Covid situation in the country and the upcoming vaccination programme.

Sources aware of the discussions during the video conference said that the chief minister made it clear that she wanted the state government to play the pivotal role in the vaccination programme.

The reason behind the clear message to the Prime Minister appeared to be political. The ruling dispensation would not like the BJP-led Centre to take credit for the vaccination ahead of the do-or-die Assembly polls in the summer of 2021, felt observers.

“The PM did not say when the vaccine would be available and how the programme would be implemented... So, it was easy for the chief minister to suggest what she felt was the most ideal way of carrying out vaccination,” said a source.

However, Mamata also  laid stress on working in tandem with the Centre and other stakeholders, a source said.

“She is aware that vaccines would be made available to the Centre first and states would have to depend on Delhi for them... This is why the chief minister did not say even once that the state is ready to buy vaccines. But at the same time she very tactfully made it clear that she wouldn’t allow any central agency to take up the vaccination,” said a source.

“More than 20 lakh infants are given vaccines and polio drops every year in the state. So it is clear that the state has the infrastructure and manpower,” said an official.

As part of its preparations for Covid vaccination, the state has prepared a list of nearly 6 lakh frontline workers, including doctors, nurses, health, ASHA and municipal workers who would get the vaccine in the first phase.

A source said that it was also conveyed to the Centre that the cold chain required for storage and supply of vaccines was available in Bengal “in some form of readiness” as the state has the infrastructure to preserve polio drops and other vaccines.

“We can store vaccines at 2°C... It is expected that the Covid-19 vaccine could be stored in this temperature,” said an official.

Mamata explained why the state health department should be given the onus of vaccination. She pointed out how “efficiently” her government worked to bring down Covid-19 positivity rate and death rate in Bengal during the festive season. “Despite the onset of festivities in the Durga Puja-Kali Puja-Chhath season and the recommencement of the massive suburban rail movements, Bengal has successfully reduced positivity rate and death rate. The discharge rate has also improved,” she was quoted as saying.

Bengal’s Covid positivity rate was 8.26 per cent on Monday, down from 9 about a month ago. The number of deaths has also come down. On Monday, 47 deaths were reported in Bengal, but about a month ago the daily average was 60 deaths, sources said.

“Despite being a border state with many international borders and...the cosmopolitan heritage of bearing the burden of patients from neighbouring states, West Bengal has been performing remarkably well,” Mamata was quoted as saying.

Mamata, sources said, also told the PM that the Centre did not help the state financially to fight against the pandemic though the state’s own revenue generation had dried up amid Covid curbs. “The state has spent around Rs 4,000 crore only on account of Covid management. But the Centre released only Rs 193 crore to the state under this head so far,” an official quoted the chief minister as saying.