Talks on with ISF and other parties for tie-up, say Adhir and Biman 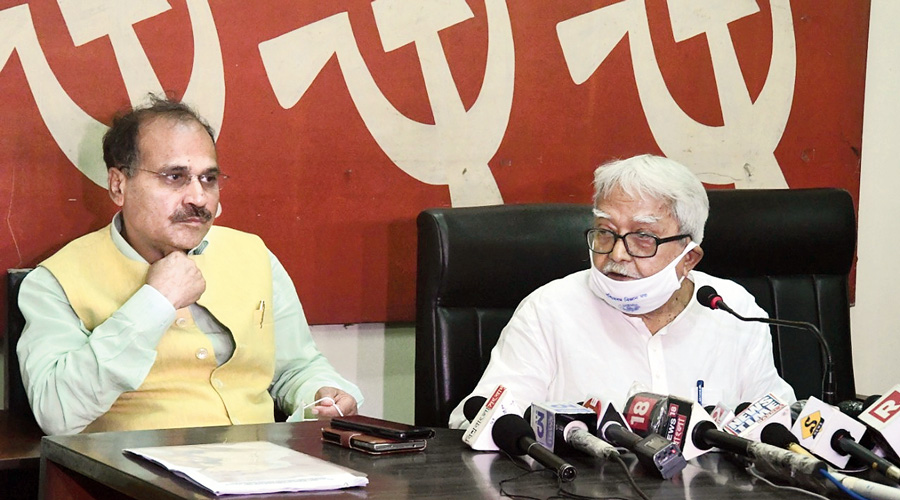 The Left Front and the Congress on Tuesday announced finalisation of seat sharing for Bengal Assembly polls, but refrained from saying the number of constituencies each would contest because of parleys with Abbas Siddiqui's Indian Secular Front and other parties.

Leaders of the Congress and the CPM met at the Left party’s headquarters at Alimuddin Street in Calcutta on Tuesday to finalise the modalities of the electoral alliance.

“We finalised our alliance at the meeting today.… The fight for Bengal will be a triangular one and the Left-Congress alliance would be a formidable force,” Chowdhury said at a news conference after the meeting.

Sources said unlike the 2019 Lok Sabha polls when a consensus couldn’t be achieved between the Left and the Congress, the process of sealing the alliance was smooth this time as both the parties were more accommodative. However, the number of seats to be allotted to each party couldn’t be announced on Tuesday.

According to Chowdhury, several smaller political forces, including ISF, NCP and RJD are willing to fight alongside the Left-Congress alliance. “That is why we need to provide space for them… So, we are not announcing the number of seats allotted for each of us right now,” Chowdhury said.

“We want that the Left parties, the National Congress and the ISF participate in the Bengal polls in 2021 on the basis of a mutual understanding,” Biman Bose echoed him.

Although both the leaders named several parties, the seat sharing formula could not be announced primarily because the ISF, a fledgling outfit that has emerged as a strong force in minority-dominated areas.

ISF chief Abbas Siddiqui told this correspondent that it had written to the CPM demanding 60 to 80 seats. He also said representatives of his party had spoken to CPM leaders about their demands on Monday.

“We have said what we want. There can be minor adjustments, but we are mainly sticking to our demands,” Siddiqui said. “I’ll either win or learn. I’ve nothing to lose. But the other parties have become weak and have been losing. I think it is better for all of us if the three hues come together to fight,” Siddiqui added.

Sources said the CPM and the Congress were yet to decide how to accommodate the ISF’s demand, which many believe is “illogical”.

“But as both the CPM and the Congress are so weak, they are not in a position to counter Siddiqui, who has already started blackmailing leaders of both the parties... A meeting between CPM-Congress and ISF leaders is likely tomorrow (Wednesday),” said a source.

Smaller Left allies have started raising objections to the induction of the ISF into the alliance. These parties are afraid that including Siddiqui — a Muslim religious leader—in the alliance may alienate the traditional Hindu votes of the Left.

“We will raise this concern at our meeting with the CPM. Muslim fundamentalists are as objectionable for us as Hindu fundamentalists,” a source in one of the minor Left parties said.

Union Home minister Amit Shah will have lunch with an immigrant family from Bangladesh during his two-day tour of Bengal later this week.

The bread-breaking schedule, sources said, is part of the BJP’s agenda to woo the migrants from Bangladesh ahead of the Assembly polls.

Shah will be at Kakdweep in South 24-Parganas on February 18 to inaugurate the Poriborton Yatra for the BJP’s Calcutta zone. Before that, he will visit the migrant family at Narayanpur village and have his lunch.

Sources said that Shah will participate in a series of central government programs on February 19.