'There are 28,000 cases in Bengal against BJP workers, mostly fabricated and false' 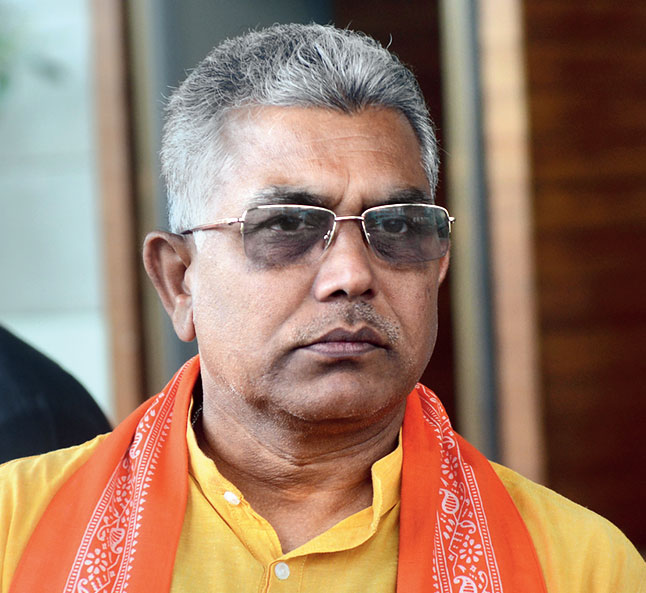 Addressing a party programme at East Midnapore’s Mecheda on Monday night, Dilip Ghosh told BJP workers not to be afraid of the police and Trinamul.
Telegraph picture
A Staff Reporter   |   Calcutta   |   Published 27.08.19, 10:40 PM

Bengal BJP chief Dilip Ghosh has exhorted party workers to unleash counterattacks on police and Trinamul Congress members, assuring his men that the consequences would be “managed”.

Addressing a party programme at East Midnapore’s Mecheda on Monday night, Ghosh told BJP workers not to be afraid of the police and Trinamul.

“Attacks on BJP workers across the state have become common. Instead of arresting those responsible, the police are framing our boys in false cases. If you are under attack, beat up police personnel, beat up TMC workers. Do not be scared. If there is any problem, we will manage it,” said Ghosh, the Midnapore MP.

Known for courting controversy by frequently issuing inflammatory statements, Ghosh said the Trinamul leadership and the police were “nothing” in comparison to his party. “If P. Chidambaram — your (Trinamul’s) grandfather — can be put behind bars, what are your leaders to us? Mosquitoes, insects,” Ghosh said.

Under attack from Trinamul, the Left and the Congress for his remarks, Ghosh refused to back down. Even as the police in East Midnapore lodged a suo motu case against him for trying to incite violence, Ghosh stood his ground.

“The police have already lodged 22 cases against me, one more will not make any difference. There are 28,000 cases in Bengal against BJP workers, mostly fabricated and false,” he said.

“What I have said is correct. I stand by it. I will continue to say such things,” Ghosh said on Tuesday.