Advertisement
Home / West-bengal / Be tortured, ye, in the name of God!

Be tortured, ye, in the name of God!

The olden practice of Charak is not just a Poila Baisakh marker. It is also an excruciating reminder of the caste divides and discriminations that typify our fabric. Moumita Chaudhuri tells it like it is 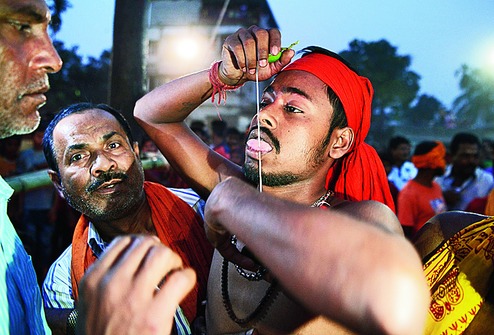 Ratikanta Pramanik is a resident of Birampur village in Bengal's South 24-Parganas. The 21-year-old has been participating in Charak rites, observed in his village this time of the year, for the last three years. "People jump off from great heights, sometimes even 20 to 30 feet," he tells The Telegraph with bravado as he describes the great leap that marks the culmination of this ritual practiced across Bengal at the end of the Bengali calendar year.

He continues, "Those men and boys who cannot muster courage are pushed from a height. The jumpers fall on knives - that have been sharpened the night before - nails, shards of glass." Does it not hurt? He nods in assent. And still he went back a second and third time? "If you have followed all the rituals correctly, then nothing will happen to you," says the young man with mohawk hair highlighted with streaks of gold. He's turned out in a pair of jeans and a tee.

Pointing to a deep cut on his wrist, he says grinning from ear to ear, "You know why this happened? I had gulped down a little water while taking a dip in the holy pond last Charak. It is a special kind of fast and one can't indulge in even a sip of water." Ratikanta's uncle, the middle-aged Mantu dismisses these theories. He has been performing the jump for 20 years and tells us that it all depends on the way you fall, there's technique involved. "There is nothing more to it."

It is difficult to pinpoint when Charak was initiated and by whom, but what is known is that in 1860, the British had attempted to enforce a ban on the practice. In a paper titled "A Barbarous Practice: Hook-Swinging in Colonial Bengal", Aniket De points out that a little less than a 100 years before that, Baptist missionary William Carey wrote about witnessing the ceremony. Sometime in between, in 1829, Ram Comul Sen, secretary of the Asiatic Society then, described it thus: "The word Charak is derived from Chakra or Charaka, which means a circle [possibly a tangential reference to the circle of life, the cycle of seasons]... It is a festival improperly termed by many Charak Puja, perhaps from the notion that every ceremony observed by the Hindus of Bengal, is a puja or religious worship..."

Charak is observed to date in Bengal. The ceremony constitutes practices that are largely about inflicting pain on the self. Apart from the rigorous fast, there is pitphoron or piercing one's back with hooks, jibaphoron or piercing the tongue, agunkhela or walking on burning coal, swinging from the Charak gachh or pole and mara khela or dancing with human skulls.

The whole point of Charak is apparently to appease the gods with gut-wrenching penance so they send plentiful rains, bounteous crops. But the onus of active divine appeasement lies squarely on those way down in the caste hierarchy - no doubt by clever human machination.

Says Ashok Kumar Kundu, an expert on rural folk festivals, "It is practiced only by the lower castes. In olden times, when the Brahmins turned out the marginalised people - Bagdi, Dolui, Haadi, Dom, Muchi - from the temple, they created their own gods. Sometimes they placed a stone under a tree or prayed to a tree trunk. When the Brahmins realised that these people and their gods could be a big source of income, they tried to win back their allegiance and get them back into the temple through Charak."

He adds, "Today, Charak has become part of folk tradition, but the rules of it were most likely invented by the Brahmins and their enforcement, for the longest time, was ensured by them in collusion with the upper classes."

Mandir Bazaar is a small town adjoining Birampur, 70 kilometres south of Calcutta. Charak is a big to-do here. But when we reach the 200-year-old temple from which the place gets its name, the priest is locking up the temple door. He tells us we must meet the Purkaits, the mul sanyasis.

The chief occupation of the people of Mandir Bazaar is farming. We walk through a narrow path and reach the two-storey house of the Purkaits. All the other houses in the vicinity are huts with tin or asbestos roofs.

As Kundu has explained, all rituals constituting Charak or gajan have end-to-end custodians - the mul sanyasis at one end and the sesh sanyasis at the other.

The term sanyasi is used for all active participants like an honorific and is not to be regarded as a caste marker. These sanyasis are not Brahmins. The Purkaits - brothers Mantu, Karthik and Dibakar - are all mul sanyasis. Says the 70-something Mantu, "We had to learn the rituals as children. Now, the rules take a toll on my health."

At Mandir Bazaar, Charak is organised by the temple committee. "The temple was built by the former zamindar, Baroda Prasad Roychowdhury, who also framed the rules of Charak observed here," says septuagenarian Sanatan Halder, whose family was entrusted with the task of sesh sanyasis. "There is no mention of this puja or its rituals in the shastras," he adds.

Charak sanyasis lead the life of celibates for a fortnight. They live on the temple premises all day long. During the day, they endure physical battering, and are allowed to cook and eat some measured morsels of vegetarian food only in the dead of the night. Kundu says that sometimes the mul sanyasi has to take a dip in the pond and then lie down on a bed of nails. In Mandir Bazaar, the ritual has been tweaked. Sanyasis prostrate on the road leading from the pond to the temple. And the mul sanyasis, after having collected the water, walk back treading on their heads.

In most places, women are not allowed to watch - forget participate - but in Mandir Bazaar, they jump from the altar of the temple, which is only four to five feet high. Kundu says in Burdwan's Katwa, women pierce their eyebrows with nails. In nearly every place, men swing from hooks attached to ropes tied around the Charak tree, which is actually a pole. We are told how their backs are rubbed with milk and mashed bananas so the hook can slip into the skin with ease.

Don't people die or contract infections from these prickings and piercings? The people are steadfast in their denial, but Kundu confirms that many sanyasis have died this way.

Sanatan Halder referred to Charak as a puja. And given that that is the enduring perception, it is odd that Brahmins who typically helm all pujas do not actively participate in this one. Says Kundu, "You could say, Brahmins, by the happy accident of birth, are incapable of sinning and Charak is all about penance. Or you might say they have always known how to avoid the uncomfortable rules they themselves wrote."

"Actually, this ritual was just a medium of entertainment for the zamindars," he adds. That it was some kind of a spectator sport is borne out by early 19th century etchings of a ritual in progress with men and women in palanquins watching all agog. There is also a theory that Charak's origins might be rooted in folk tradition. Either way, according to Kundu, the non-Brahmins possibly were at first coerced into playing along and then somewhere along the way they came to like and seek the honour and elevation they were afforded those few days of the ritual. It became a validation of sorts. It perhaps appealed to a more innate desire for "upliftment".

In the 1862 account of Calcutta's high society, titled Hutom Pyanchar Naksha (or Sketches By Hutom, The Barn Owl), Kaliprasanna Singha mocks: "Although he is of a lower caste, he has been elevated by virtue of following ascetic practices over the past few days: our master had to fall at his feet and show him respect."

The practice continues unquestioned in many pockets of Bengal. In many others, it has been tempered. The modifications speak to the shifting class equations. Says Dibakar Purkait of Mandir Bazaar, "We do not sharpen the knives anymore. Also, the height has been reduced. You can always choose not to jump and just touch the wooden plank on which the knife is placed."

This year, Dibakar's nephew, Shankar, has refused to take the pledge of mul sanyasi. He says, "Why should I step on the heads of my people, instead of walking on the road. As I see it, that is a bigger sin."