We must put an end to the practice of damaging assets created by rival politicians: Binay Tamang 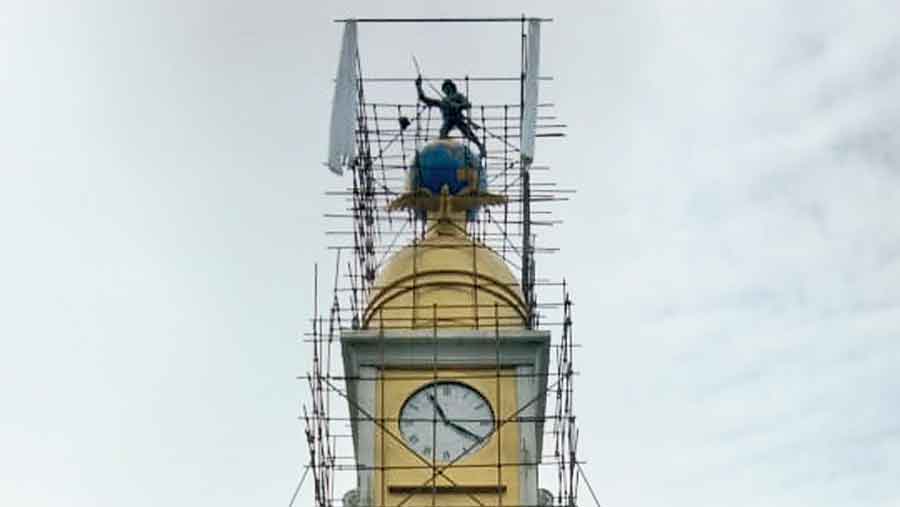 The Gorkha Rangamancha Bhavan in Darjeeling with the newly installed statue atop on Friday
Telegraph picture
Vivek Chhetri   |   Darjeeling   |   Published 03.10.20, 02:45 AM

The GTA has decided to ban political events at the Gorkha Rangamancha Bhavan, the complex which was the epicentre of clashes between Gorkha Janmukti Morcha supporters and police on the language issue in 2017, which had led to a renewal of the statehood agitation, including a 104-day closure of the Darjeeling hills and the present state of flux in the local politics.

Anit Thapa, the chairman of the board of administrators appointed by the Mamata Banerjee government to run the Gorkhaland Territorial Administration, said on Friday: “Since today is a holiday, we will issue an order tomorrow (Saturday) to ensure that no political programmes are held here.”

Thapa was speaking at a ceremony to “reinstall” the statue of a Gorkha soldier, which had originally been erected by GNLF leader Subash Ghisingh atop the town hall here but subsequently uninstalled by Bimal Gurung when he took charge of the GTA in 2012 as it was purportedly “inappropriate to point a khukuri” towards Mahakal mandir.

Some weeks back, Morcha leader Binay Tamang had requested the GTA to reinstall the Gorkha statue. Speaking at the programme on Friday, he also appealed to the GTA to ban political events at the Gorkha Rangamancha Bhavan.

“We must put an end to the practice of damaging assets created by rival politicians. I would request the GTA to come up with a strict order banning all political events here,” said Tamang.

There have always been demands to ban political events at places like Chowrastha, Mall Road and the Gorkha Rangamancha Bhavan (which is on the Mall Road).

Before a civic election, the undivided Morcha had announced its intention of banning political events at Chowrastha, but the same was never implemented.

“The khukuri is pointing towards Chumbi Valley, towards China and not towards Mahakal mandir,” said Tamang, referring to the new statue of the Gorkha soldier holding the machete.

On June 8, 2017, supporters of the undivided Morcha and police had clashed on the premises of the Gorkha Rangamancha Bhavan and the adjoining Mall Road.

When the clash took place, Bimal Gurung, who was the chief executive of the GTA then, was at the town hall while chief minister Mamata Banerjee was at Raj Bhavan, just about 500m away, attending a cabinet meeting.

The Morcha supporters had organised a rally to protest against the alleged decision of the state government to make Bengali a compulsory subject at hill schools. The state government later issued a clarification that it had no such intention.

Following the clash, the hills were plunged into violent agitation, which veered towards the statehood issue. The hills were closed for 104-days and the Morcha broke into two — one headed by Bimal Gurung and the other by Binay Tamang.

The Tamang faction is an ally of the Trinamul Congress. Despite Tamang and later Thapa being appointed by the state government to run the GTA, their faction has lost two consecutive elections to the alliance of the BJP and the Gurung camp.

The appointment of board of administrators at the GTA was necessitated by the end of the five-year tenure of the hill body’s first elected body in 2017.