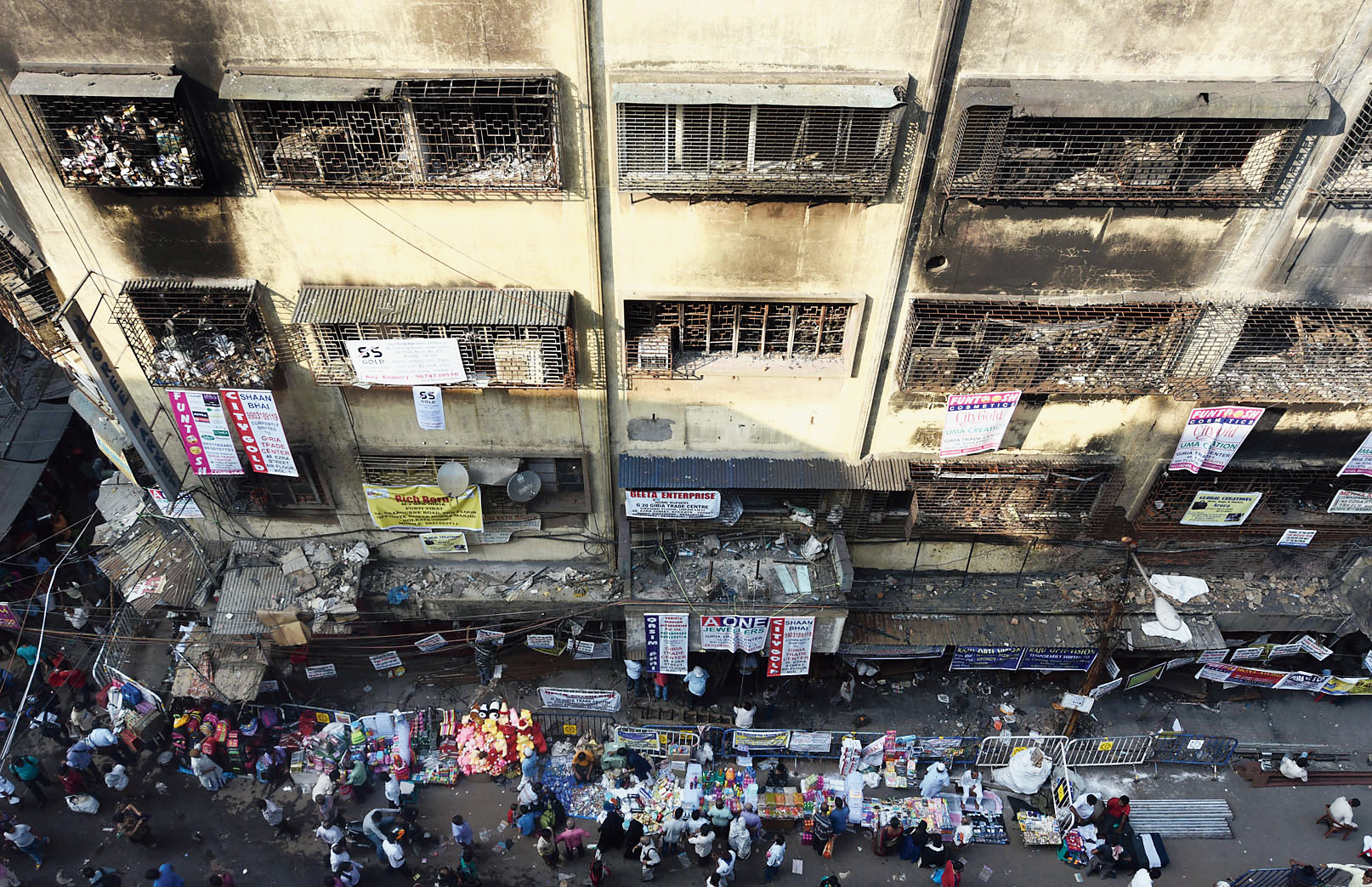 A team from IIT Roorkee has said after an inspection of the fire-ravaged Bagree Market this week that the municipal authorities should get an advanced test done to check if the building has tilted in any direction.

If the building has tilted under the impact of the blaze, it might not be immediately visible even to a trained eye. But irrespective of how much the six-storey structure has tilted, the Calcutta Municipal Corporation (CMC) would need to evacuate hawkers and customers who have already made a comeback to the narrow lane in front of the wholesale market.

The two-member IIT team has mentioned this in its preliminary recommendations to the CMC.

“We have specified the distance that should be maintained from the market building,” said Umesh Sharma, associate professor in the civil engineering department of IIT Roorkee.

Metro had asked Sharma on Saturday evening whether prolonged exposure to extreme heat — the fire at Bagree Market couldn’t be doused for 85 hours — can lead to a structure collapsing. “We do not know if people (hawkers) have come back very close to the building. But we have given our recommendations (regarding precautions to take against a collapse). The ball is now in the municipal authorities’ court,” he said.

A civic official said evacuation was “conditional” and that the CMC would take a call based on the outcome of the test recommended by the IIT experts. “If tilting is confirmed, only then will evacuation be necessary.”

According to a civil engineer working for a top construction company, testing the tilt of a building is part of the process of ascertaining whether the structure is a threat to safety. “All buildings have a certain tilt from a 90-degree position. There is a limit to this, though. If a test reveals that the tilt is more than the permissible deviation, it is cause for concern,” the engineer said.

A visit to Bagree Market, which towers over Canning Street, confirmed that life is back to normal for traders who have stalls and shops in the vicinity. The only ones still affected by the fire are those who had shops inside the building.

Scores of hawkers line the stretch of Canning Street in front of the market. Those who would earlier occupy the footpath facing the building now sit on the edge of the road.

If a portion of the weakened structure were to collapse, hawkers and customers thronging the lane would be in the line of danger. Police personnel guarding the entrances to the market are also in the danger zone.

“It’s business as usual after a lull,” a hawker said.

But he isn’t sure if the building near which he sells his wares is safe or not. “I think engineers have said the building is safe but I could be wrong.”

Customers crowd around the stalls along the footpath all day looking for bargains that they say no other marketplace in town offers. The stretch being reopened to pedestrians means that at any time of day there are about 150 people right in front of Bagree Market.

Since the fire broke out, several civil engineers have said that exposure to heat for a long period can weaken the steel reinforcements of a building.

A forensic team that was outside the market on the second day of the fire recorded temperatures as high as 170 degree Celsius in some parts of the building. The team had used a thermal imaging camera and the lowest recorded temperature was 68 degrees Celsius.

Besides doing a tilt test, the team from IIT Roorkee has asked the CMC to use props to support the burnt portions of the structure.

CMC officials said the team asked for physical measurements of the joists, beams and columns for the study.