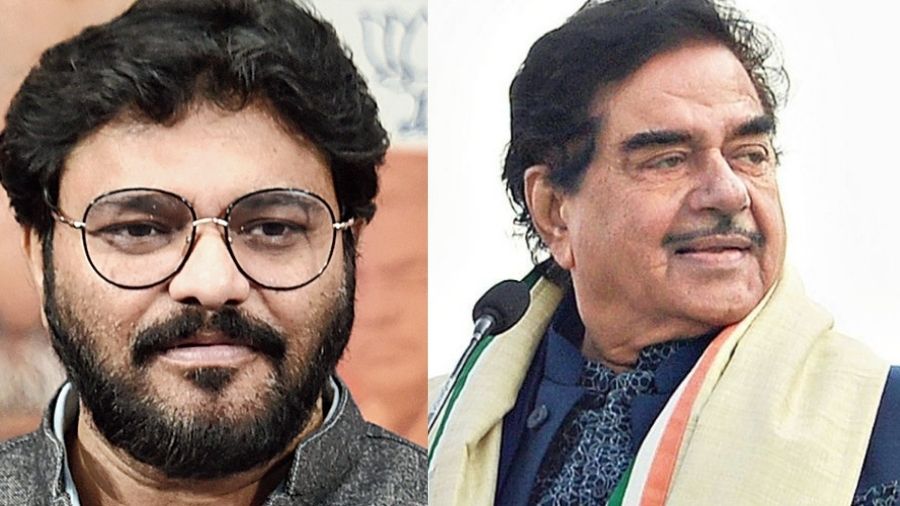 The Trinamil Congress is on way to a clean sweep as it demolished rivals in the Asansol Lok Sabha seat where movie actor-turned-politician Shatrughan Sinha is leading by an unassailable margin of nearly 2.3 lakh votes, while it's candidate Babul Supriyo is on way to win the prestigious Ballygunge constituency.

In Asansol former Union minister and popular veteran Bollywood star Shatrughan Sinha won by a margin of over 3 lakh votes. BJP had won the seat in the 2019 Lok Sabha polls.

In Ballygunge, TMC candidate singer-turned politician Babul Supriyo is ahead of CPI (M) 's Saira Shah Halim, gathering some 40,623 votes against Halim's 28,515 votes. Interestingly CPI(M) has overtaken BJP's Keya Ghosh who has till now managed to get just 8,094 votes, thus lending some credence to the Communist party's claim that they are on a revival path.

The by-polls, which took place on April 12, were necessitated as Supriyo resigned as the MP of Asansol after switching over to the TMC from the BJP, while state minister Subrata Mukherjee, who represented Ballygunge, died last year.

I sincerely thank the electors of the Asansol Parliamentary Constituency and the Ballygunge Assembly Constituency for giving decisive mandate to AITC party candidates. (1/2)

West Bengal Chief Minister and TMC supremo Mamata Banerjee thanked voters from the Asansol Lok Sabha seat and Ballygunge Assembly Constituency for giving a decisive mandate to TMC candidates in both the seats, where by-polls were held.

"I sincerely thank the electors of the Asansol Parliamentary Constituency and the Ballygunge Assembly Constituency for giving decisive mandate to AITC party candidates," she tweeted.

We consider this to be our people's warm Shubho Nababarsho gift to our Ma- Mati- Manush organization. Salute to the voters for reposing faith in us, yet again.(2/2)

"We consider this to be our people's warm Shubho Nababarsho gift to our Ma- Mati- Manush organization. Salute to the voters for reposing faith in us, yet again," she added.

TMC leader Firhad Hakim said rising unemployment and prices and the lack of any steps by the BJP central leadership, which he described as "Nero fiddling while Rome burnt," being among causes for BJP's poor showing.

BJP state president Sukanta Majumdar said it is a general trend that the party in power in the state generally wins the by-elections.

"But I can assure you that we will win back Asansol in 2024. We would defeat TMC's reign of terror in the next Lok Sabha polls," he said.
Even if the prediction comes true, party sources admit that there will be no cakewalks.

In Ballygunge, Supriyo’s nomination has upset a large segment of the Muslim electorate that had for many years been loyal to Mamata.

Local Trinamul leaders privately admit that the discontent runs deep. So much so that the party’s national general secretary, Abhishek Banerjee, had to seek votes in Mamata’s name in the constituency.

Muslims make up more than 40 per cent of the 2.5 lakh voters of cosmopolitan Ballygunge.

“We have been with Didi (Mamata). Her exemplary work during the pandemic had earned our respect. But that doesn’t mean we will support Babul Supriyo,” said Akhter Khan, Ballygunge resident and a driver by profession.

Many Muslims in Ballygunge accuse Supriyo of inciting the riots that rocked Asansol in 2018. Supriyo was then BJP MP from Asansol. He had later publicly backed the contentious Citizenship Amendment Act (CAA) and threatened to deport Muslim protesters.

“It’s difficult to defeat Babul because I don’t think there will be a free election. But I sincerely hope the margin comes down,” Khan said.

A Trinamul source agreed the margin would come down from the 75,000-plus votes by which Mukherjee had in 2021 defeated his nearest rival and BJP candidate.

Saira, daughter-in-law of former Bengal Assembly Speaker Hashim Abdul Halim and niece of veteran actor Naseeruddin Shah, is popular among progressive sections because of her role in the anti-CAA movement. Her campaign drew support from several apolitical platforms and activists.

Saira, the activists say, is the strongest secular candidate in Ballygunge.

Her husband Fuad Halim, the Left-Congress nominee from Ballygunge in 2021, had barely polled a 6 per cent vote share against Trinamul’s 71 per cent and the BJP’s 21 per cent. But Saira is confident of doing well if the poll panel and the police ensure a free and fair election.

“We believe that the Trinamul Congress fears a massive backlash against its candidate. Let’s see how the police and the Election Commission fare on polling day,” she said.

Supriyo left everything to the party machinery during the campaign. Unlike his days in the BJP, when he would miss no opportunity to lock horns with his critics, he stuck to the schedule the local Trinamul leadership had worked out for him.

Supriyo met the “No vote to Babul” campaign with public defiance. In several of his Ballygunge rallies, he mentioned his years as Asansol MP.

“Whatever I have done for Asansol is available in public documents. I carry that place in my heart,” he told a news conference.

Both the BJP and Left nominees have, however, used his Asansol association to mock him.

“If he is right about having done so many good things for Asansol, he should have had the guts to contest from Asansol again on a Trinamul ticket,” Paul, sitting MLA from Asansol South constituency, told this newspaper.