Assam resident held with animal skin and scales in Jalpaiguri

Bishnu Jain, from Tezpur of the neighbouring state, was trying to smuggle these items to Nepal along with some aides 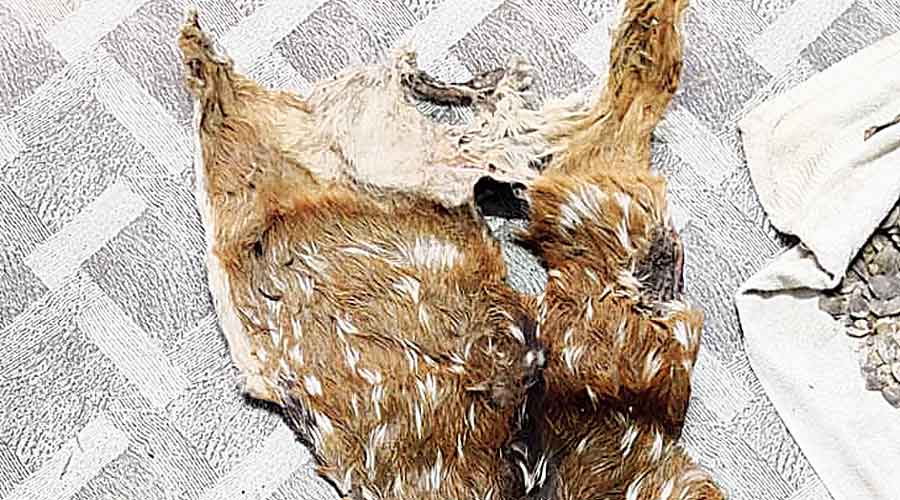 Foresters of Baikunthapur forest division in the Dooars have recovered deer skin and pangolin scales from a resident of Assam on Sunday and arrested him.

Bishnu Jain, from Tezpur of the neighbouring state, was trying to smuggle these items to Nepal along with some aides when he was nabbed in Jalpaiguri’s Oldabari, sources in the state forest department said.

“We had prior information  and a team from Sarugara forest range reached Odlabari on Sunday morning. Soon, they spotted an SUV at the bypass area of Odlabari and intercepted it. Two persons managed to flee but Jain could be nabbed. A deerskin and 2.1 kilos of pangolin scales have been recovered from the vehicle,” said a forest official.

Odlabari is a hamlet in Malbazar subdivision of Jalpaiguri in western Dooars and is around 40km from Siliguri.

During preliminary interrogation, Jain revealed plans to smuggle these items to Nepal. Pangolin scales have a huge demand in some southeast Asian countries where they are used in traditional medicine.

In the past 24 hours, this is the second consecutive raid by the foresters of Baikunthapur. On Saturday morning, they foiled the smuggling of Ganges softshell turtles. Three turtles were recovered from Darjeeling More, the principal entry point to Siliguri, and three residents of Bihar arrested in this connection.

The special operation group of Siliguri Metropolitan Police arrested Dilshad Khan and Md Islam of North Dinajpur district on Saturday with around 300 grams of brown sugar (a derivative of heroin) worth around Rs 60 lakh, police sources said.