Before speaking about President’s rule in Bengal, Shah in reply to a question sought to paint a grim picture in the state and claimed the BJP would form the next government 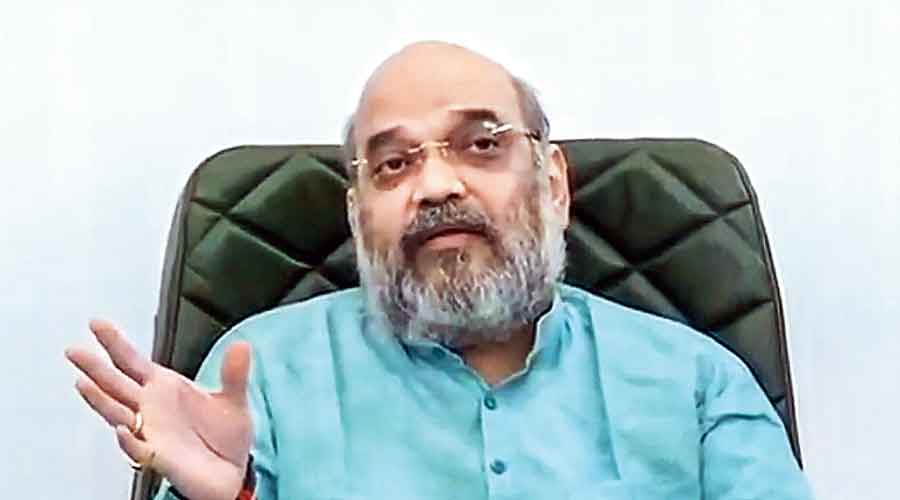 Amit Shah, however, added that the central government had to view the situation through the Constitution before taking a decision.
PTI
Our Special Correspondent   |   New Delhi   |   Published 18.10.20, 01:57 AM

Union home minister Amit Shah has said in reply to a question that law and order in Bengal is in tatters and it is “wajib (just)” on the part of his party leaders to demand President’s rule in the state.

Shah, however, added that the central government had to view the situation through the Constitution before taking a decision.

“Dekhiye, political party ke neta hain. Stithi itni gambhir hai ki wo maang karen, unki jagah wajib hai (look, they are political party leaders. The situation is so serious that if they are demanding, it’s just on their part),” Shah said in an interview to CNN-News18.

The Union home minister was replying when asked for his views on demands by his party colleagues in Bengal to impose President’s rule.

Shah added: “So far as the government of India is concerned, we have to view the situation according to the Constitution. We have to take the decision based on what report the governor gives, how the situation stands. But what the BJP leaders are demanding, I believe that the situation is so serious that their demand is not wrong.”

Pointed out that he was suggesting the situation in Bengal hadn’t yet reached a stage to impose President’s rule, Shah replied: “Maine aisa nahi kaha (I didn’t say so).”

BJP leaders said in private in the capital that they did not get the impression that the Centre was considering any option to impose President’s rule so close to the Assembly polls scheduled in the summer as it might generate sympathy for the Mamata Banerjee government. It is only being used as a political tool to build an atmosphere against the Mamata government, a BJP leader said.

The interview was the first extensive TV appearance of Shah against the backdrop of rumours floating about his health after two rounds of hospitalisation. Shah’s scheduled Bengal visit before the Pujas has also been put off. The interview appeared to be an effort to show that the home minister is fine.

Before speaking about President’s rule in Bengal, Shah in reply to a question sought to paint a grim picture in the state and claimed the BJP would form the next government.

“The law-and-order situation in Bengal is in tatters. Relief operations after Amphan went haywire. Even food grains sent by the Centre were scattered here and there due to corruption. The kind of arrangements that should have been in place for corona was not made. Corruption is at its peak.… Infiltration is going on unhindered. Bomb-making factories are found in every district. The situation is very bad,” Shah said.

Asked about projecting a chief minister face, Shah said: “That too can happen.” At the same time, he stressed the people of Bengal want to oust the Trinamul Congress and that is the main thing.

On the Bihar polls, Shah asserted that the BJP would abide by coalition dharma and keep its promise of having ally Nitish Kumar as chief minister even if the Janata Dal United won fewer seats than the BJP.

Shah did not rule out the option of Chirag Paswan’s LJP coming back in the NDA after the elections, keeping the perception of the LJP acting as a “B team” of the BJP alive.