Party sources said Arjun Chowrasia, 28, about to lead a bike rally to welcome the home minister, was found hanging at an abandoned building in Cossipore 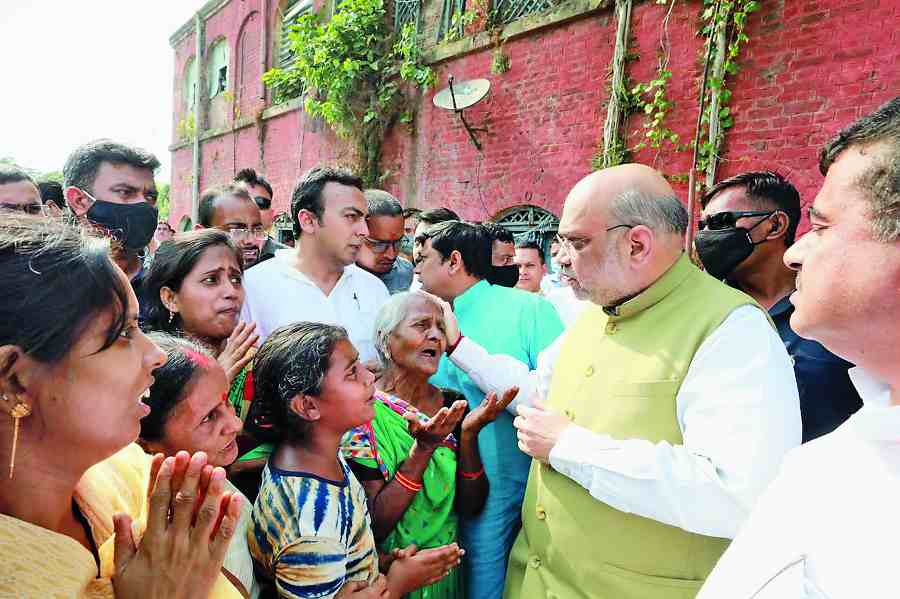 Union home minister Amit Shah said the BJP wanted a CBI probe into the “political murder” of a youth wing leader in the city on Friday and that his ministry had sought a report from the Bengal government.

The Trinamul Congress wondered how Shah, in Calcutta on Friday during a trip to Bengal, could jump to a conclusion even before an investigation had been conducted.

The BJP Yuva Morcha leader, identified as Arjun Chowrasia, 28), was found hanging at an abandoned building in north Calcutta’s Cossipore on Friday morning. BJP sources said he was to lead a bike rally to welcome Shah.

“We will ensure that those behind the murder of BJP Yuva Morcha leader Arjun Chowrasia are punished. The home ministry is extremely concerned about this political violence and has asked for a report from the Bengal government,” Shah told reporters after meeting Chowrasia’s family.

“Yesterday the Trinamul government completed its first year.… Today political murders have started in the state. The BJP condemns the murder of Arjun Chowrasia. I met the grieving family; his grandmother was also beaten by police. BJP leaders have moved the high court demanding a post-mortem that should be video-recorded and the BJP demands a CBI inquiry into the incident,” he added.

Chowrasia is said to be a victim of political violence in the aftermath of the 2021 Assembly elections and had bee escorted home on court orders after he had to flee.

His death has become the latest flashpoint in Bengal politics with the BJP once again accusing the ruling Trinamul of using violence to terrorise the Opposition. Since its defeat in the Assembly polls, the BJP’s politics in Bengal has been woven around the narrative of post-poll violence and deterioration in the law-and-order situation. Several BJP leaders have urged the Centre to invoke Article 356.

Sources in the BJP said that the demand was raised before Shah at a party meeting on Friday evening. The Union home minister is said to have told his colleagues that it would not be possible to replace a government with a huge mandate but promised to visit Bengal regularly to ensure an end to Trinamul rule.

Multiple sources in the BJP pointed out that Chowrasia’s death had come at a time Bengal was grappling with several law-and-order problems such as the massacre in Birbhum’s Bogtui and the rape in Hanskhali. Calcutta High Court has ordered CBI inquiries into six cases in the past eight months.

The order of so many CBI probes together, legal sources said, was unprecedented anywhere in India as law and order is a state subject.

“...The high court has handed over so many cases to the CBI, taking the investigation away from Bengal government agencies. This proves that the high court also has no faith in the state government and its police,” Shah said on Friday.

He compared the Trinamul regime with that of the Left. “Attempts used to be made to throttle the voice of the Opposition parties through violence during Left rule too, but now the degree of such violence is much higher under Trinamul. According to his family, Chowrasia’s body was snatched away (by the police). The Trinamul Congress, which celebrated its anniversary (in power for the third term), is trying to send out a message that it will not stop (the violence) that started after the Assembly elections,” Shah told reporters in Cossipore.

A division bench of Calcutta High Court on Friday ordered that the post-mortem be conducted at the Command Hospital in Alipore.

Following a prayer by Chourasia’s mother, the bench of Chief Justice Prakash Srivastava and Justice Rajarshi Bharadwaj said the head of the department of forensic science at R.G. Kar Medical College and Hospital and the All India Institute of Medical Science in Kalyani would be present during the post-mortem. The judges said the chief judicial magistrate of South 24-Parganas would also be present.

The court asked the Calcutta police chief to ensure that Chourasia’s body is shifted safely from R.G. Kar Medical College and Hospital to Command Hospital.

Social media was abuzz with posts from BJP leaders condemning the incident. Trinamul accused the BJP of trying to extract political mileage.

“Is he (Shah) an astrologer?” asked minister Chandrima Bhattacharya during a news conference at Trinamul Bhavan on Friday evening where she and cabinet colleague Sashi Panja countered the Union home minister.

“How could the Union home minister claim it to be a political murder even before the basic investigation, such as a post-mortem, was done? How can a home minister utter such words before a police investigation?” Bhattacharya said.

“We have several doubts as so many BJP leaders and the Union Home minister himself rushed to Cossipore.… We demand a probe to find out whether it was a pre-planned thing,” she added.

Trinamul spokesperson Kunal Ghosh wondered what could be the outcome of the investigation or the post-mortem after Shah’s claim of a political murder.