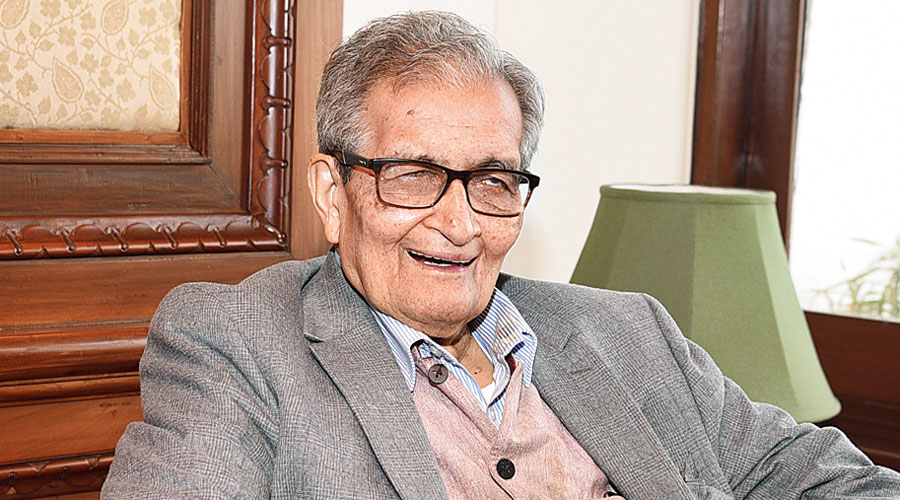 Amid the controversy over Nobel laureate Amartya Sen telephoning Visva Bharati Vice-chancellor Bidyut Chakraborty and introducing himself as Bharat Ratna, the famed economist has denied having any conversation with the VC in recent times, according to a teachers' association of the central university.

In a mail to Sudipta Bhattacharya, who is the president of the Visva Bharati Faculty Association, the Nobel laureate said the phone call that the varsity authorities claim was made by him is "tantalisingly untrue" and that he had spoken to Chakraborty a few years ago, not in June 2019 as was being said.

Visva Bharati authorities had in a recent statement claimed that Sen had called the VC from a number in India either on June 2 or 14 in 2019 and complained about the eviction of hawkers from near his Shantiniketan residence.

Following this, the teachers' association president had sent a mail to Sen seeking his comment about the university's statement and got a reply on December 29 last year.

"On June 2, 2019, I was in France, attending a meeting in Paris. On June 14, 2019, I was in America, at our home in Cambridge Massachusetts. After that I was in England, in the English Cambridge," Sen said in his reply to Bhattacharya.

About speaking to the VC, Sen said, "On your other question, I have talked with the present VC of Visva Bharati, Bidyut Chakravarty, only once, to the best of my knowledge.

This was a few years ago when he was chairing a meeting for the release of a book by Pranab Bardhan.

"His claim that we have talked on the phone and I had introduced myself as Bharat Ratna is tantalisingly untrue.

Thanks for your interest in preventing injustice and untruth!" Sen said.

Responding to Bhattacharya's query on the Nobel laureate's visit to India in the summer of 2019, the economist said, "I came on the 3rd of July, and went to Delhi first, and then Calcutta and Santiniketan. I was not in India at all in June 2019. I am extremely rarely in India in June. I prefer to come only after the monsoon settles in - so it tends to be July, not June."

The VC or any other senior official of the central university could not be reached for comments.

Bhattacharya had in December last year said that the VC had claimed during a recent online meeting with the faculty that he had got a phone call from a person who introduced himself as "Bharat Ratna Amartya Sen" and requested him not to evict hawkers from near his Shantiniketan house as his daughter "buys vegetables from them".

The faculty body president had sent a mail to Sen seeking his remarks about the VC's claim.

Bhattacharya said Sen had previously denied such claims by Chakraborty.

Another controversy had erupted on December 24 in 2020 when the media reported that the university had written to the West Bengal government alleging that dozens of land parcels owned by it were wrongfully recorded in the names of private parties, including Sen.

On that day Prime Minister Narendra Modi had addressed the centenary function of Visva Bharati.

The Nobel laureate, who was born in Shantiniketan in 1933, had said that the university land on which his house stands is on a long-term lease, which is nowhere near expiry.