Advertisement
Home / West-bengal / All fall but one stands tall: campus

All fall but one stands tall: campus

Not surprising that the resistance to fascism at this moment in the country is being led by students: Prabhat Patnaik 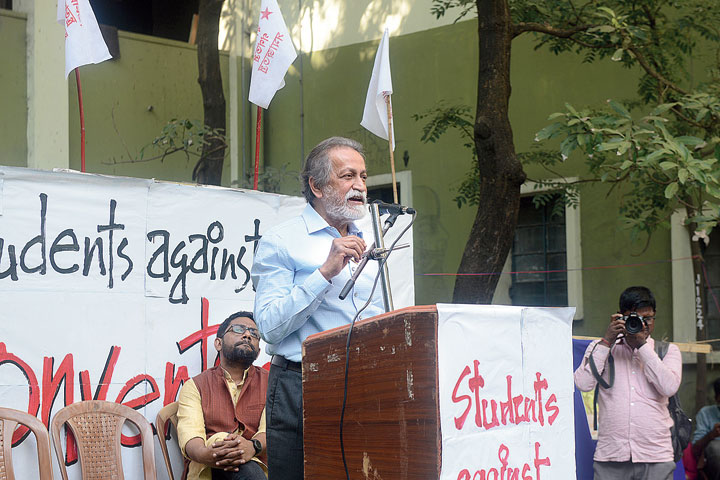 The BJP government has reduced institutions like Parliament, the judiciary and the media to “rubber stamp” but has failed to contain universities, which have “held out” despite repeated attempts to bend them, economist Prabhat Patnaik said at Jadavpur University on Friday.

“One of the first things that the BJP government tried to do on coming to power was to capture the universities. They put handpicked people of the RSS as vice-chancellors in a whole range of universities. JNU, Santiniketan…. The idea was they would infiltrate the teachers’ association, the students’ union and thereby break the unity of the students. But they have not succeeded…. So, Parliament, judiciary, media, all these institutions have been reduced to a role of simply rubber-stamping the BJP government’s decisions. One institution that has actually held out is the universities,” Patnaik said in his address to students.

“It is not surprising that the resistance to fascism at this moment in the country is being led by students.”

Patnaik is professor emeritus at Jawaharlal Nehru University’s school of social sciences. He was at JU to speak at a convention to mark the fourth death anniversary of Rohith Vemula, the Dalit student of the Central University of Hyderabad who was allegedly driven to suicide.

Student leaders from Aligarh Muslim University and the Central University of Hyderabad, teachers from universities such as Presidency and students from several institutions attended the programme.

Patnaik explained why the students were spearheading the protest. 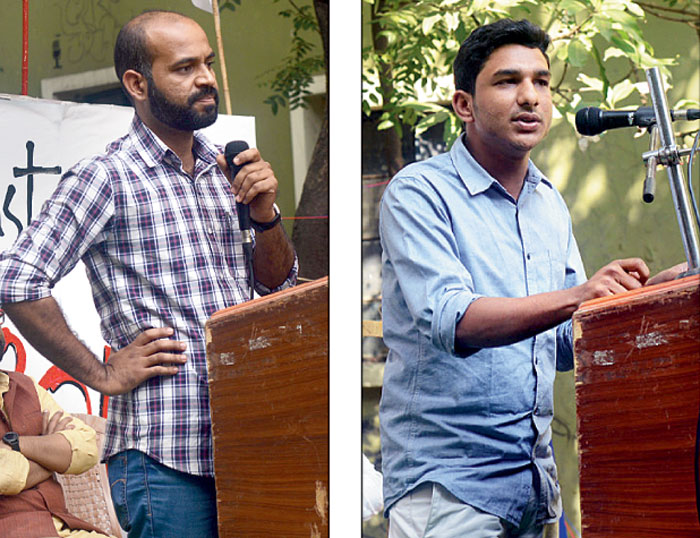 Abhisekh Nanda of the Central University of Hyderabad and (right) Istiaq Ahmed, a law student at Aligarh Muslim University, speak at the convention on Friday

The veteran professor drew a parallel between Prime Minister Narendra Modi and Hitler but sought to make a distinction between the two regimes.

“The one big difference between the fascism then and fascism now is that fascism then, even though it was ruthless and inhuman, temporarily succeeded in overcoming unemployment. As a matter of fact, between 1933 and the war, there was this short period during which Hitler was quite popular because the horrors of the war did not visit the German people and, on the other hand, the horrors of unemployment had been overcome by Hitler. He could bring the economy out of the crisis. Our current fascists in India are actually incapable of achieving that,” said Patnaik.

Istiaq Ahmed, a law student at Aligarh Muslim University who was on the campus when police had allegedly barged in and beat up students on the evening of December 15, said if the students did not speak up now, the future generation would not forgive them.

“If we don’t protest against the Citizenship (Amendment) Act and the National Register of Citizens now, the posterity won’t forgive us. They would say: the freedom fighters had brought us Independence, but what were you doing when the BJP government was taking the Independence away,” said Istiaq.

Abhisekh Nanda of the Central University of Hyderabad said the Modi government had launched an attack on the very Preamble to the Constitution and a fierce resistance that was being led from campuses was the only hope.

The point about the Modi government failing to capture universities was raised by former JNU student Umar Khalid during a public meeting at JU against the CAA and the NRC on Monday.

Patnaik said the success of the movement by the students lay in the fact that they had forced the judiciary and political parties on issues such as the right to dissent and the CAA and the NRC.

“The judiciary over the past two days has made a slight turn. This is an outcome of the students’ movement. That is also happening to political parties. Just look at Navin Patnaik. His party had voted for the CAA in the Rajya Sabha. But now he is speaking against implementing the act…. As the movement is escalating, it is casting its impact on judiciary…. This will revive the parties and give them backbone,” said Patnaik.

Unity among political parties could provide the only way forward, he added. “The students have struck the widest possible unity among themselves, leading to the spread of the movement across campuses. But now the political parties have to do this. They have to come on board.”