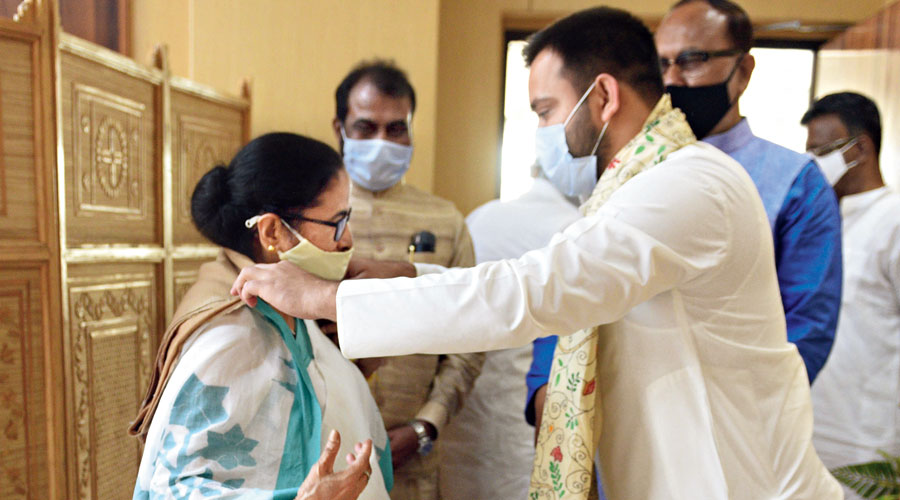 Mamata Banerjee and Tejashwi Yadav at the state secretariat in Calcutta on Monday
The Telegraph picture
Meghdeep Bhattacharyya   |   Calcutta   |   Published 02.03.21, 04:01 AM

The Young Turks of Uttar Pradesh and Bihar politics on Monday threw their weight behind Mamata Banerjee in Bengal.

The expression of solidarity is fuelling hope in the Trinamul Congress that the Hindi-speaking voters of Bengal would favour the ruling party at the hustings.

The back-to-back endorsement from the heartland is also expected to help Trinamul drive home the message that it is not against those with roots outside the state but its “outsider” label is aimed solely at those parachuting into the state to divide and polarise the people.

Akhilesh, the Samajwadi Party chief, held a news conference on his home turf.

Tejashwi, the RJD leader who came within striking distance of power and  gave the BJP alliance a scare in the Bihar elections although he was initially written off, met the Bengal chief minister at her office at Nabanna on Monday evening.

Tejashwi’s gesture stood out all the more because he gave the Brigade rally of his Bihar allies —  the CPM and the Congress — a miss despite being in the city on Sunday.

Both young leaders  virtually echoed each other while delivering their messages aimed at the large number of people from the two states who live in Bengal. Some estimates say voters in Bengal from the two states total at least 45 lakh. The voters from both states are being assiduously wooed by the BJP.

Tejashwi, 31, urged the voters against getting swayed by the BJP’s “double-engine sarkar” pitch — a suggestion that having the same party in control of the Centre and the state government would expedite development in the state.

He asked the people to learn from the example of his home state.

“We will use all our strength to support Mamata Banerjee. Wherever she needs us, we will be there for her. No matter how hard the BJP tries, Bengal is a different kind of place. The language, the culture, the heritage, the ethos… of Bengal has to be protected. Democracy must be saved from those who are trying to destroy it,” Tejashwi said after meeting Mamata, echoing the uncompromising stand of his father Lalu Prasad against the BJP.

“This is not only about Bengal, but about values, for the whole country, the Constitution and democracy,” the young leader added.

Tejashwi made his message crystal clear: “Those from Bihar who live here, I would urge them to support Mamata Banerjee.”

“That deceit of a double-engine sarkar, people (here) ought to know how that worsened the deprivation of the masses,” Tejashwi added.

Mamata lauded Tejashwi, asserting that he had actually won the Assembly polls in Bihar but was deprived of victory by the trickery of the BJP, and said she was certain that sooner or later he would come to power in the state.

Hailing Lalu Prasad as a father figure, Mamata wished him a long life for the sake of democracy.

Mamata added: “They (the BJP) cannot win this election, no matter how much you try, with all the resources and powers at your disposal.”

Asked if there were any talks with Mamata on seat-sharing, as the RJD purportedly wants 10-odd seats to contest from in districts such as Howrah, West Burdwan and Calcutta, Tejashwi said: “When she is fighting here, there would be no need for us.”

Although Tejashwi was to appear on the Brigade dais on Sunday, and he made it to Calcutta on time, he did not participate in the rally.

Sources attributed this to advice from his Bihar ally Dipankar Bhattacharya, the general-secretary of the CPI (ML).

Bhattacharya has been repeatedly advocating that non-BJP forces, including the Left, should de-prioritise their fight against Mamata in Bengal and focus on keeping the BJP out.

Asked if his equation in Bengal would impact his allies such as the CPM and the Congress in Bihar, Tejashwi said every state has to be treated differently, according to the ground reality.

“In Kerala, the Congress and the CPM are in a direct fight, whereas they are allies in Bengal,” he pointed out.

Earlier in the day, Akhilesh, 47, declared his party’s moral support for Mamata in Bengal.

“I will ask all our well-wishers to support Mamata Banerjee, to secure another victory for her…. We fully agree with her concerns about the BJP,” he said.

The BJP mocked both Yadavs.

BJP state youth wing chief Saumitra Khan said Akhilesh and Tejashwi were not even in power in their own states and claimed that neither wields any influence in Bengal.

“What they say matters precious little here. We are coming to power,” said Khan.