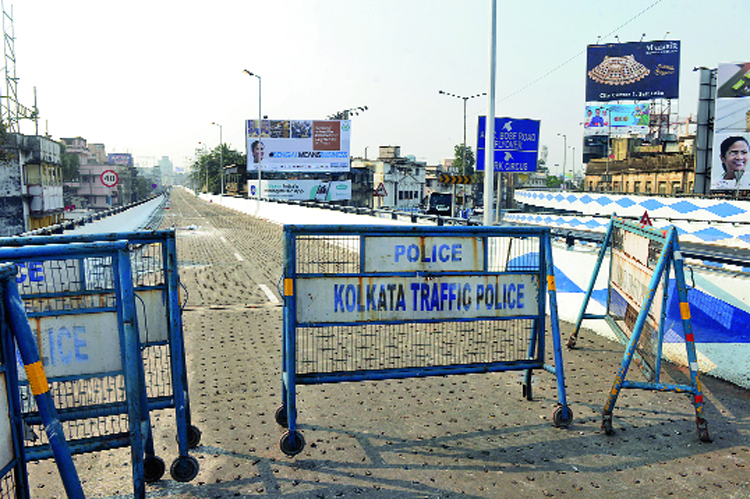 Guardrails placed at the mouth of the still-to-be-inaugurated ramp that branches off the Parama flyover and merges with the AJC Bose Road flyover
The Telegraph picture
Kinsuk Basu   |   Calcutta   |   Published 07.02.19, 10:02 AM

Police have decided not to tinker with traffic movement from the EM Bypass till Park Circus and Race Course Road for at least a week after the ramp connecting the Parama and AJC Bose Road flyovers is opened.

The idea is to assess the impact of the change before deciding if any changes need to be made, traffic officers in the city police headquarters said.

Metro had reported on Monday that a new choke point at the Race Course Road crossing could be the price of a seamless drive from the EM Bypass towards the city through the soon-to-be inaugurated ramp.

An estimated 110 vehicles currently reach the crossing every minute during peak hours, which traffic officers suspect will rise to at least 140 once the ramp becomes operational.

The vehicle count on the AJC Bose Road flyover will go up because traffic will be pouring in from three directions: Suhrawardy Avenue, Nasiruddin Road and the ramp connected to the Parama flyover.

A senior traffic officer said that the crossing where these three streams of vehicles will land is currently not equipped to handle the additional traffic load. “The inevitable fallout of this will be a long tail of cars on the AJC Bose Road flyover.”

Lalbazar has initiated a study to ascertain the average number of vehicles coming from different directions towards this potential choke point. The police are hoping that the findings will throw up a solution in terms of diverting a portion of this traffic load.

The study will consider traffic flow in the following directions around the Park Circus seven-point crossing:

The statistics will be split into peak-hour and lean-hour traffic before the police bosses sit down to decide the best circulation plan.

“We believe cars coming down Suhrawardy Avenue will avoid taking the AJC Bose Road flyover after the ramp opens,” an officer said. “They would prefer taking Park Street from the seven-point crossing during the morning rush so that they reach Esplanade or BBD Bag faster.”

The junction of AJC Bose Road, DL Khan Road and Hospital Road is seen as one of the problem points. The cyclical timing of the traffic signal at this intersection is one of the longest, considering the heavy flow of traffic from Vidyasagar Setu and the AJC Bose Road flyover. This junction is also part of chief minister Mamata Banerjee’s regular route.

Officers said any attempt to tweak the signal timings here would have a ripple effect on traffic flow.