From Bagdogra to Jalpaiguri, she was flooded with greetings and it took her hours to reach her home on the outskirts of Jalpaiguri town 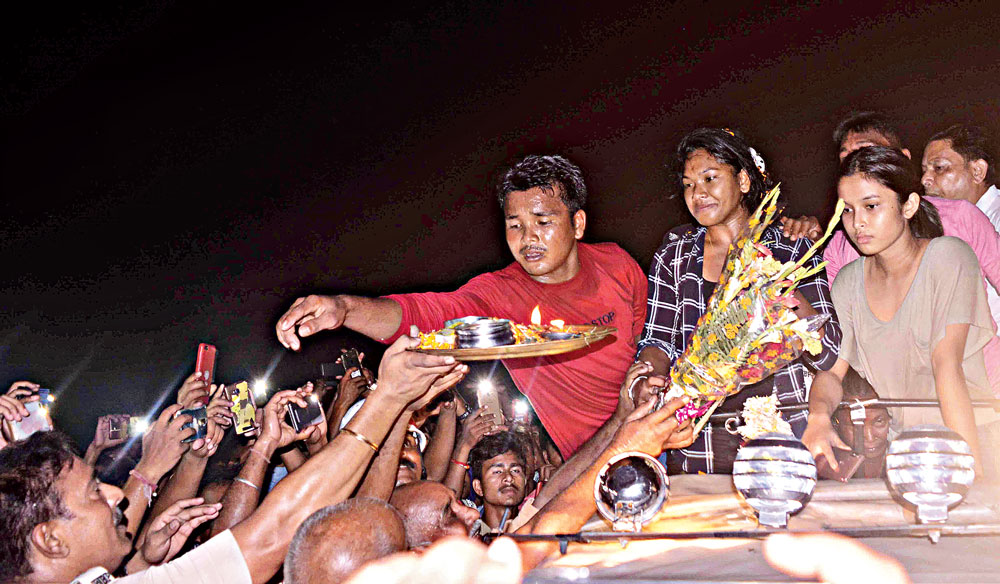 The golden girl of Jalpaiguri, Swapna Burman, returned home on Friday after 11 months.

This is the first time that Swapna came to north Bengal after winning gold at the heptathlon event in the Asian Games in Jakarta last month.

From Bagdogra to Jalpaiguri, she was flooded with greetings and it took her hours to reach home in Ghoshpara, located on the outskirts of Jalpaiguri town. She was felicitated in a number of places of Siliguri and Jalpaiguri through the day and will be honoured again on Saturday.

Swapna, who arrived in Bagdogra this afternoon from Calcutta, was received at the airport by Nantu Paul, vice-chairman of North Bengal Board for Development of Sports & Games.

As she came outside, she got an overwhelming welcome as several people were present to greet her. On way to Siliguri, she was felicitated by the Kamtapur Progressive Party leaders at Shivmandir. Hundreds of people of the Rajbangshi community — Swapna is also from the community — were present at the event.

“It is an honour for us to felicitate her. She has achieved huge success in an international arena for our country. We hope she will manage to do similar performance in the upcoming international events for the country,” said Atul Roy, the party chief and vice-chairman of the Kamtapuri Bhasa Academy.

Swapna was also felicitated at the Siliguri Journalists’ Club. There, she said she is focussing on the Tokyo Olympics of 2020. “I will resume my practice and training in couple of weeks,” she said.

After returning from Jakarta, Swapna had been to Mumbai for treatment as she had suffered injuries on her knee and back. She will stay in Jalpaiguri for some days and then head to Calcutta to attend rehab sessions.

In Jalpaiguri, neighbours and relatives with musical bands took Swapna home in a procession showered with flowers and greetings.

“I am overwhelmed that so many people have waited for me for hours. It is a great feeling to receive such a welcome in my hometown,” said Swapna.

Additional reporting by our Jalpaiguri Correspondent