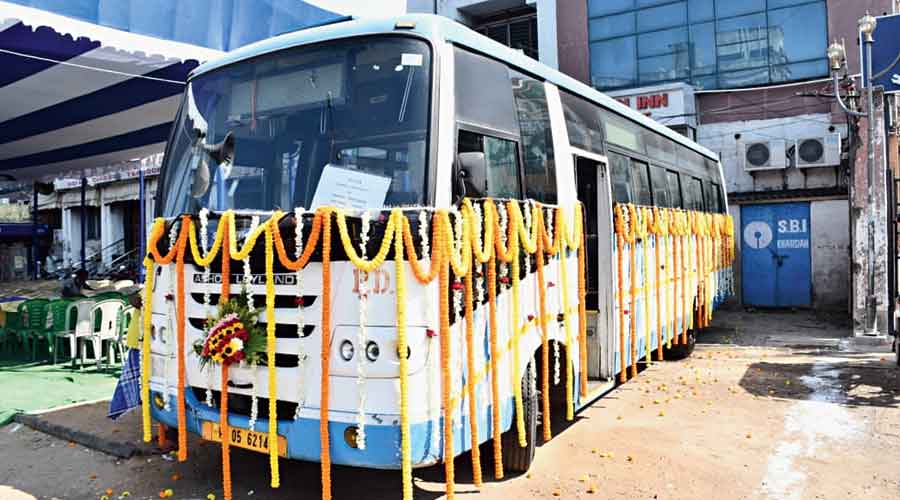 The Khardah Municipality in North 24-Parganas, jointly with the state transport corporation, on Monday rolled out an affordable air-conditioned bus service to connect the town and nearby areas to Sector V in Salt Lake, Bengal’s IT hub.

Trinamul MP from Dum Dum Saugata Roy flagged off the bus service from Khardah Municipality Ground in the presence of the members of the civic body’s board of administrators and transport department officials.

A transport official said that it was for now a single-trip service. The bus starts at 8.30am from Khardah and leaves Sector V at 5.15pm to return to Khardah. After assessing demand, the number of trips will be increased.

Sources said around 200 youths from Khardah work in private firms and IT companies in and around Salt Lake. In the new normal, with the dearth of transport facilities, the AC bus would alleviate commuting woes for youths working in Salt Lake, said a municipality official.

“Though local trains will roll out from Wednesday, most of the youths said they would like to avail of the bus service as they want to avoid the rush in trains,” said Kajal Sinha, who chairs the board of administrators at Khardah Municipality.

A municipal official said that they would ensure that Covid protocols were adhered to by bus passengers. He added it was a direct bus service to Sector-V and no one would not be able to board the bus midway. “However, they can get down at their respective destinations,” he said.

Khardah commuters said they had to spend Rs 250 on one trip to their Salt Lake workplace, around 20km from the town.

Rajib Mukherjee, an employee with an engineering company in Sector V, said the AC bus had come as a big relief for his budget.

“For the past three months I have been spending huge sums on commuting to my workplace in Salt Lake and back. Each trip cost me Rs 250. It is a huge relief that we will be paying only Rs 55 for a one-way trip to office,” he said.