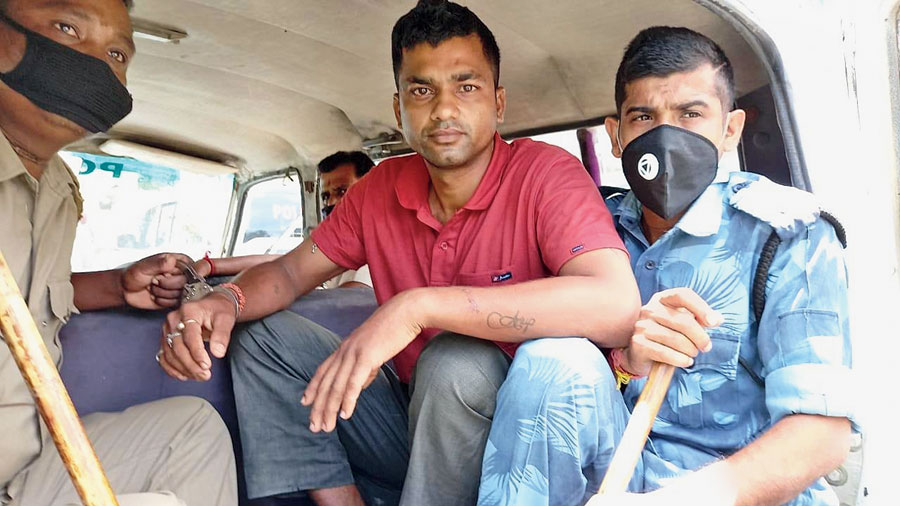 The BSF constable accused of gunning down his two colleagues at Maldakhand near the Bangladesh border alleged on Wednesday that seniors had been mentally harassing him and siphoning off money meant to buy food for the force.

A BSF inspector and a constable had been shot dead allegedly by Uttam Sutradhar near the Maldakhand border outpost in North Dinajpur on Tuesday early morning. The outpost is manned by the 146 Battalion of the BSF.

While Sutradhar was being taken to court from Raiganj police station on Wednesday, he said: “I had been facing humiliation from some senior officers at the camp for many months because I had protested against their corrupt activities. They even siphon off money meant for our food and indulge in illegal acts.”

The constable, who was booked under Section 302 of IPC and the Arms Act, said the senior officers would harass him in many ways.

“I was assigned with additional work as they wanted me to toil hard. The seniors stopped me from talking to my family members over the phone many times and would even snatch away my food. They tortured me in such a way that I would react,” Sutradhar said before he was taken away to the court in a police vehicle.

A BSF officer said on condition of anonymity that the force was also conducting an inquiry to find out the motive behind the killings. “The probe is in progress and we cannot make any comment right now.”

A court in Raiganj remanded Sutradhar in police custody for five days.

A senior police officer said the investigators had come to know that Sutradhar had shouted that he would “end the traitors” while shooting at the inspector and the constable. “Even some villagers have heard it. The constable needs to be interrogated further to know what made him say so. If required, we will speak to BSF officers and take Sutradhar to the spot for investigation,” said the police officer.