Tiger population at the site has gone up to seven 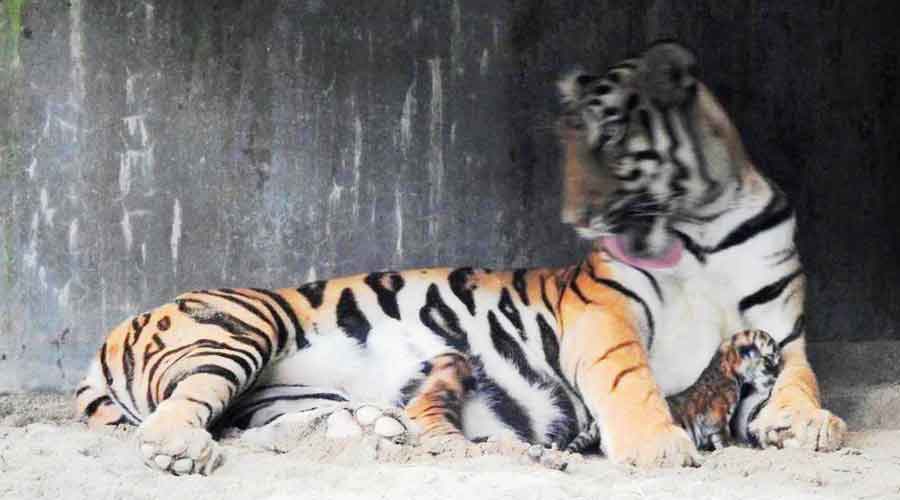 Shila with two of her three newborns at her enclosure in the Bengal Safari on Siliguri outskirts
Telegraph picture
Bireswar Banerjee   |   Siliguri   |   Published 13.08.20, 01:59 AM

Shila, the Royal Bengal tigress at the popular Bengal Safari park on Siliguri outskirts, gave birth to triplets on Wednesday.

The birth of three more cubs has increased the tiger population to seven at the popular open-air zoo.

Dharamdeo Rai, the park’s director, confirmed the birth of the three cubs, but said their gender could not be determined as no one could go near Shila right now. He added that Shila had mated with Vivan, a tiger of the same park this May, and delivered the cubs after around 100 days of pregnancy.

The cubs, sources said, were born between 4.45am and 7.20am. Since then, officials, vets and security guards are monitoring the health of the newborns who are in an enclosure with their mother.

Back in 2018, the tigress had given birth to three cubs here. Chief minister Mamata Banerjee had named the cubs Ika, Rika and Kika. Ika, however, developed an infection and died within the space of a few months.

“This is why we are extra cautious this time (about the health of the cubs). Our team is keeping a close watch on the newborns and the tigress who so far appear to be doing well,” Rai said.

A forester said they were elated over the second successful captive breeding of Royal Bengal Tigers within two years.

“It is an achievement for us as tiger population is increasing here (at Bengal Safari). In due course, we hope the park gets recognition from the Centre under its national tiger conservation programme,” he said.

The park, a crowd-puller before the onset of the Covid-19 pandemic, is spread over 297 hectares, and has enclosures for tigers, leopards, the Asiatic black bear, gharials (fish-eating crocodiles), rhino, different species of deer and an aviary.