20 arrested so far for killings in Bengal's Birbhum district 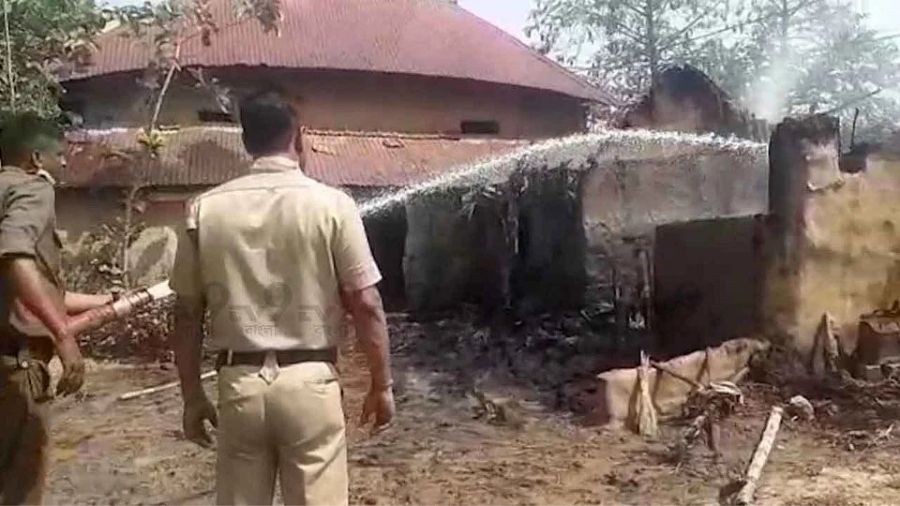 At least 20 people have been arrested so far in connection with the violence in West Bengal's Birbhum district that claimed eight lives, a senior police officer said on Wednesday.

Eleven people were arrested the same day for their involvement in the incident.

"With nine more arrests, the number of those who have been nabbed in the case rose to 20. We are grilling them to find out if there were more people involved in the incident.

"Some accused seem to have fled the village. We are trying to trace them," the officer said.

He also stated that forensic experts were examining the ravaged houses to get an idea about the "nature of the mishap".

Bengal CM Mamata Banerjee on Wednesday said she will be going to violence-hit Birbhum district on Thursday to take stock of the situation. "Postponing my visit as other political parties huddling there," she said.

"Not justifying Birbhum killings, but such incidents are more frequent in UP, Gujarat, Madhya Pradesh, Bihar and Rajasthan," Mamata further said, adding that action against perpetrators will be taken irrespective of their political colours.

The Union home ministry has sought a detailed report on the incident from the state government.

The charred bodies of at least eight persons were found in two houses at Bogtui village on the outskirts of Birbhum’s Rampurhat on Tuesday amid allegations that they were burnt alive in retaliation to the killing of Bhadu Sheikh, a Trinamul leader, on Monday night.

The victims include a child and six women, aged between seven and 52, and a newly married couple. Seven of the victims were related to one another.

“Eight people were killed in the incident. Seven bodies were recovered from a single house.… One among the three injured died in hospital,” director-general of police Manoj Malaviya said.

Located around 220km from Calcutta, Bogtui is a village with over 2,000 people.

Since the time of the Left, the village has been a victim of violence and crime — an upshot of a host of unlawful activities, such as manufacture of crude bombs, supply of arms and illegal sand and stone mining, that thrived in its vicinity.

“The village has had two groups that have been at odds with each other for the past three decades.… During the time of the Left, both the groups belonged to the Left. Since the change of guard, they have shifted allegiance to Trinamul… but their fight is continuing,” said a source.

The carnage — the worst in recent memory in Bengal and the first such massacre after Trinamul assumed power in 2011 — came as an embarrassment for the ruling party.

Opposition leaders cited intra-Trinamul tussle for spoils as the principal reason behind the massacre. They demanded imposition of President’s rule, saying that law and order had broken down.

Chief minister Mamata Banerjee, in a letter to governor Jagdeep Dhankhar, referred to a larger plan to malign Bengal.

Government sources cited prompt action, such as the formation of a special investigation team and proceedings against some policemen, to insist that law was taking its course.

The dead have been identified as Jahanara Bibi (Doli), 38; Lili Khatun, 18; Sheli Bibi, 32; Nurnehar Bibi, 52; Rupali Bibi, 39; Kazi Sajidur Rahaman, 22; Tuli Khatun, 7; and Mina Bibi, 40. The first seven were relatives and their bodies were found in the one-storey house of Sona Sheikh. Kazi Sajidur and Lili Khatun were the newly weds.

DGP Malaviya told a news conference that the killings did not seem to have any political connection. This comment of Malaviya, even before the SIT has begun its probe, drew sharp criticism from the Opposition parties.

Anubrata Mondal, the controversial Birbhum Trinamul chief, added fuel to the fire by claiming “TV burst and tar theke agun (the fire was ignited by a TV that exploded)”.

Mondal had told a news channel in the morning that the fire could have been triggered by a short-circuit or explosion of a TV or a gas cylinder. Mondal, however, did not make any comment later in the day.

The failure of the police to curb illegal sand and stone businesses — believed to be the reason behind the killing of Bhadu who allegedly controlled the unlawful trade — also came up during the Opposition attacks.