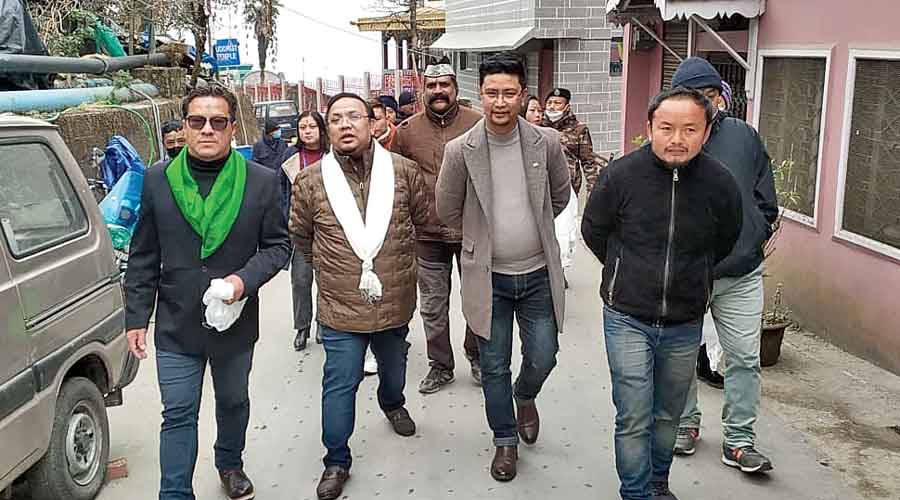 BJP MLA and GNLF leader Neeraj Zimba campaigns for a candidate ahead of the civic polls in ward 13 of Darjeeling on Thursday.
File photo
Vivek Chhetri   |   Darjeeling   |   Published 19.02.22, 12:58 AM

In the run up to the Darjeeling municipality elections scheduled on February 27, the year of discussion is 1984 and not 1986.

In the hills, 1986 or chhayasi in local parlance is considered a defining year in politics as the Gorkhaland statehood agitation had peaked from that year with the emergence of the Gorkha National Liberation Front (GNLF) leader Subash Ghisingh and his brand of identity politics.

In contrast, till 1984, Darjeeling municipality elections were not fought on party lines. A good number of citizens, especially social workers, took part in the elections. “Prominent citizens  would contest the civic elections till 1984,” said B.K. Pradhan, who was elected the chairman then.

“This year, the talk is more about how things were till 1984,” said Poonam Kumar Sharma, lawyer and former councillor of Darjeeling municipality.

There are many parallels.

“With 148 candidates in the fray, it is an election with the greatest number of contestants this year,” said a veteran politician who has “retired”.

An apolitical leader, B.K. Pradhan’s victory is still a talking point in Darjeeling. “We had 26 commissioners. Thirteen of them voted for me and the rest 13 for Lakpa Dong. The returning officer was asked to cast a vote and his vote went in my favour,” said B.K. Pradhan.

Following  the1986 Gorkhaland agitation, elections to Darjeeling municipality was held only in 1994, where the GNLF’s D.K. Pradhan was elected the new chairman. “From that year political parties started fielding candidates. Hill politics was dominated by single parties such as the GNLF and the Gorkha Janmukti Morcha. It was always the predominant party that won the civic bodies,” said an old timer.

In 2004, Amar Lama, was the lone councillor from the Opposition to win a seat in Darjeeling municipality. Lama is now the chairman’s face for the Bharatiya Gorkha Prajatrantik Morcha. “I wish elections to hill bodies were held like they were till 1984,” said Lama.

Darjeeling municipality was formed in 1850, but the first elections were held only on March 23, 1964. “However, the elected body started on a false start as the newly elected body could not assume charge because of an injunction. Another election was held on May 1, 1996 and J.B. Thapa was elected the chairman,” said an old timer.

In the last 58 years since the first election was held, Darjeeling municipality has been administered by an administrator or a non-elected person for as many as 27 years.