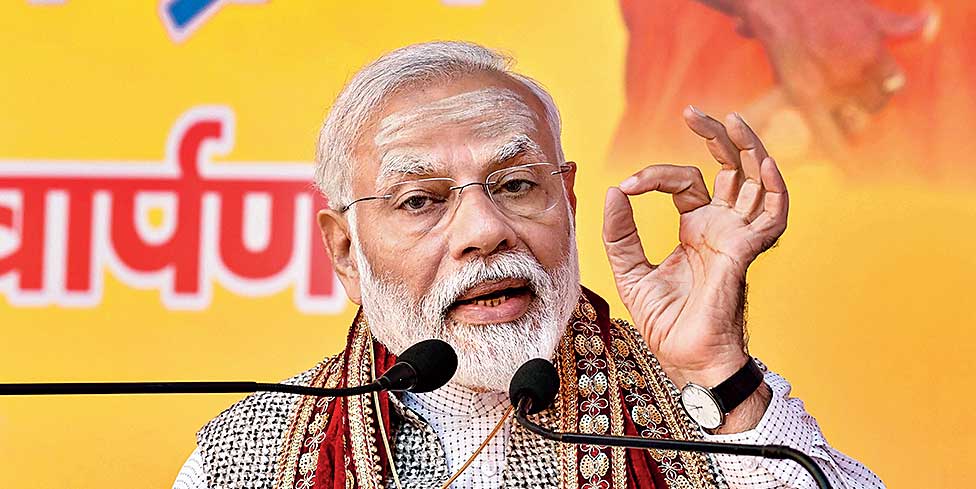 Prime Minister Narendra Modi on Friday reviewed various development projects in his Lok Sabha constituency of Varanasi, where he batted for turning it into a hub of national waterway.

The presentation also highlighted the progress made in the Kashi Vishwanath Mandir complex by using a drone video of the layout.

The efforts undertaken on effective management of Covid-19 were also discussed, an official statement said.

The presentation dwelled upon development of world-class communication and connectivity infrastructure in Varanasi.

"The prime minister directed that Varanasi should become a hub of national waterway connecting Haldia.

Planning should be done for development of entire ecosystem, cargo shipping and freight movement, as is being done in major port cities.

He also directed the officials to complete the expansion and modernisation work of the Lal Bahadur Shastri International Airport on priority, so that Kashi becomes one of the leading cities to provide state-of-the-art rail, road, water and air connectivity, the statement said.

The virtual meeting was attended by public representative of Varanasi and senior officials.

He directed that appropriate skill mapping of the returning migrant workers be taken up on priority and they should be provided gainful employment on the basis of their skill sets.

Help of experts should be taken to maintain their historical and architectural legacy. Carbon dating should also be conducted, he said.

The Kashi Vishwanath Trust should prepare a route map with appropriate tourist guides to facilitate the pilgrims who make a visit in this complex, he suggested.

The review meet was informed that more than 100 major projects within the financial outflow of around Rs 8,000 crore are currently being undertaken in Varanasi pertaining to creation of social and physical infrastructure like hospital buildings, national waterways, ring roads, by-pass, international convention centre and a 'Rudraksh' built with Indo-Japan collaboration.

He suggested that optimum utilisation of non-renewable energy should be utilised for creation of next generation infrastructure.

Saturation of households and street lights with LED bulbs should be taken on a mission mode in the entire Varanasi district, Modi told the officials.

For increasing the tourism and travel footprint in Kashi, it was directed that work of cruise tourism, light and sound show, rejuvenation of Khidkiya and Dashaswamedh Ghats, display of Ganga Aarti through audio-video screens should be fast-tracked.

He directed the officials to organise week-long festivals of countries like Japan and Thailand where Buddhism is practised to celebrate their art and culture heritage.

He felt that as Varanasi is a tourist destination, it should excel in all parameters of sanitation and cleanliness.

All efforts should be taken to achieve the desired levels of open defecation-free '(ODF) plus', use of mechanised sweeping and cleaning, ensuring 100 per cent door-to-door waste collection and making the entire environment very positive and healthy.

The prime minister also reviewed the progress of the Atma Nirbhar Bharat announcements and directed that the benefits of this scheme should reach the citizens expeditiously.

The progress of PM SVANidhi Scheme for street vendors should be closely monitored, he said.

All street vendors should be equipped with appropriate technology and infrastructure, for helping them switch to cashless transactions, he said.

The prime minister emphasised that farmers are one of the key priorities of the government and intensive efforts should be made to enhance their incomes.

He directed for promotion of beekeeping and highlighted the potential of bee wax in augmenting the income of the farmers.

The officials were asked to ensure setting up a packaging institute in Varanasi on priority, so as to enable the farmers get better purchase of their products and make them export ready in Varanasi itself.