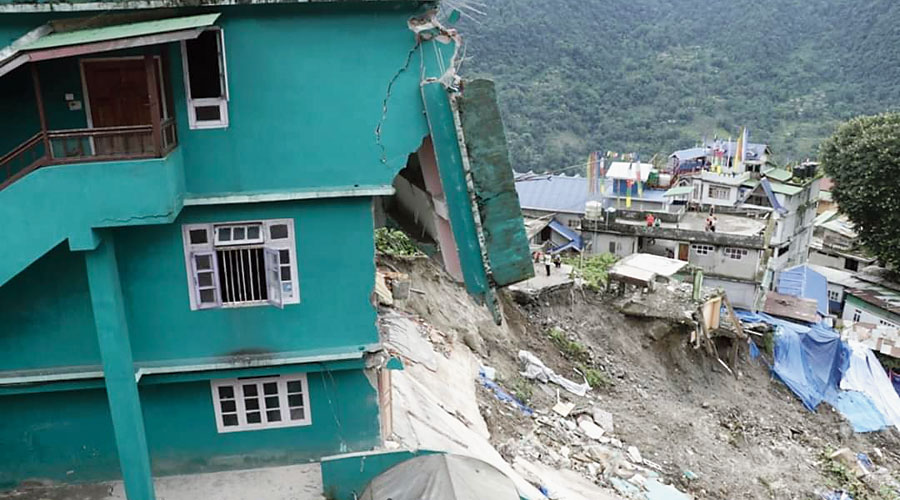 Heavy rain over the past 24 hours in North Sikkim triggered landslides and damaged roads at many places in the district.

A massive mudslide damaged a portion of the sch­ool and filled the campus with slush and boulders that came gushing from the hillside.

“In Bringbong, the multipurpose structure of the |Bri­ngbong school has been completely washed away. Other structures like the |midday meal kitchen is |covered with slush. Water supply has been disrupted. Items of the school have |been shifted to a secure structure,” North Sikkim district collector Tenzing T. Kaleon said.

A house was damaged at Munsithang. Reports of minor landslides have come from other parts of North Sikkim.

Kaleon said officials had sp­read out to different parts |of the district to assess the |ext­e­nt of the dama­ge and a clearer picture would emerge later.

“As of now, the­re are no repo­rts of major da­m­­age, but yes, the Bringbong primary school has been imp­a­cted,” he told The Telegraph.

According to the Gangtok station of the India Meteorological Department (IMD), No­r­th Sikkim is expected to rece­i­ve more heavy rainfall in the next 12 hours. “Rain or thundershowers are likely to occur throughout Sikkim in the next 24 hours and heavy rain in North district overnight. North Sikkim recorded 74.5 milimetres of rain in the past 24 hours,” said a senior IMD official.