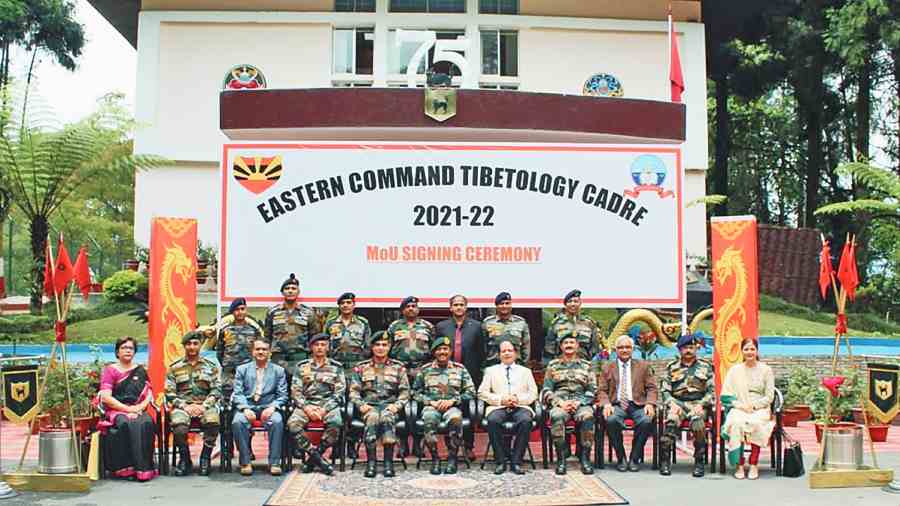 Lt Gen Tarun Kumar Aich, the GOC of Trishakti Corps, and Avinash Khare, the V-C of Sikkim University and others at the MoU signing.
The Telegraph   |   Published 16.05.22, 12:35 AM

A memorandum of understanding (MoU) was signed between the Indian Army and Sikkim University on Sunday for a Tibetology cadre course .

Lt Gen Tarun Kumar Aich, the GOC of Trishakti Corps, and Avinash Khare, the vice-chancellor of Sikkim University, along with other officers and varsity faculty, were present  during the MoU signing.

So far, three Tibetology cadre courses have been conducted at Gangtok by Trishakti Corps, headquartered at Sukna, on the outskirts of Siliguri, on behalf of the Eastern Command based in Calcutta.

The Eastern Command Tibetology cadre course is a six-week programme conducted at Gangtok under the aegis of Black Cat division of the army.

The army has encouraged study of Tibet to enhance knowledge of China and Tibet. The course gives an insight into various aspects like history, religion, language, culture, politics, demography and geography of Tibet.