Chasing 231 for victory, Bangladesh came close before being bowled out for 213 with the spin trio of Rahkeem Cornwall, Brathwaite, Jomel Warrican 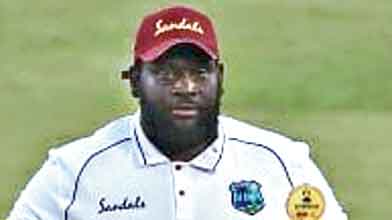 A second-string West Indies team under stand-in captain Kraigg Brathwaite completed a 2-0 series sweep against Bangladesh with a dramatic 17-run win in the second Test on Sunday.

Opener Tamim Iqbal top-scored for the hosts with a breezy 50 and Mehidy Hasan Miraz made 31 down the order, but Bangladesh fell short at the Sher-e-Bangla National Stadium in Dhaka.

West Indies had pulled off the fifth-highest successful run chase in Test history with their three-wicket win in the series opener in Chattogram.

Brathwaite led a weakened squad to Bangladesh after several players, including Test captain Jason Holder, opted out of the tour citing COVID-19 concerns.

“Coming here without some players, with the protocols and so on — very thankful to God for opportunity to captain West Indies,” Brathwaite said.

“Shakib is a two-in-one player, so when we lose him, it’s difficult as captain to get a combination that can balance the team,” Mominul said.