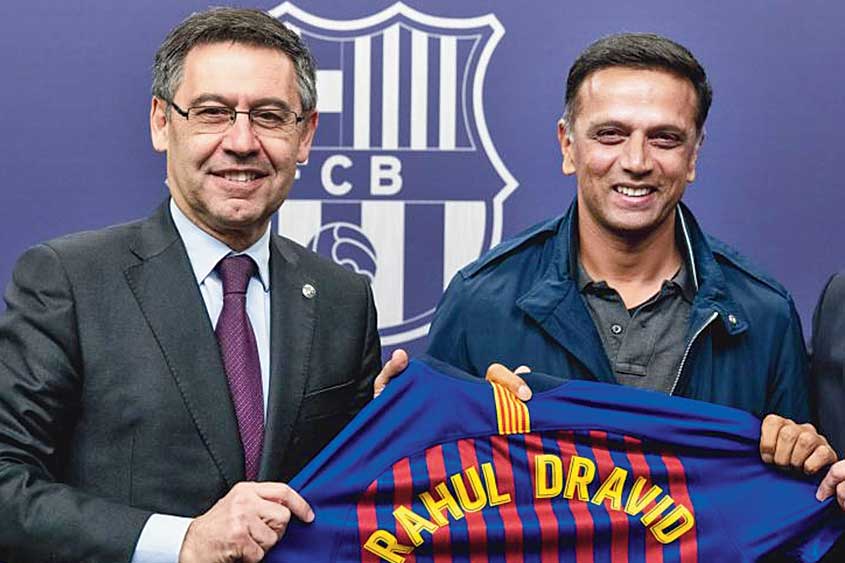 Rahul Dravid was at Nou Camp as Barcelona beat Atletico Madrid 2-0 in a La Liga match on Saturday. Dravid was completely in awe of Lionel Messi and Luis Suarez and said it was brilliant to watch them live.

“It’s incredible, it’s a huge honour, it’s one of the things I’ve always wanted to do — come to Nou Camp and watch a match. To be here and experience the atmosphere, it’s absolutely electric.

“To be able to watch players like Messi and Suarez play live, it’s fantastic for me and my family. Thanks to Barcelona FC for the hospitality, it’s been excellent,” Dravid said in a video posted by FC Barcelona.

Dravid could not stop praising Messi and called him an “absolute genius”.

“Cricket is a different game. We have great atmosphere and great crowd in the IPL and a lot of Test matches as well. Cricket is the No.1 sport in India but football is catching up very quickly. The ISL, the new league there since the last few years, Indian football is catching up but yeah, this was a lovely atmosphere to watch. Similar to some of the IPL games that we have.”

Dravid expressed his eagerness to see Barcelona perform against Manchester United in the Champions League on Wednesday.

“Obviously, it’s one of the most popular clubs in the world and when you have people like Messi, people follow it and everyone watches and follows the La Liga, especially the big games — Barcelona vs Real Madrid or Barcelona vs Atletico Madrid. Looking forward to watching how Barcelona perform in the Champions League against Man United in a few days’ time.”

Dravid’s is not the first former India cricketer to enjoy a match at the Nou Camp.

In late December, former India captain Sourav Ganguly took some time off from his hectic schedule and flew to Barcelona. He paid a visit to the iconic stadium to watch Messi and Co. take on Celta Vigo. Sourav was witness to another Messi master class in a 2-0 victory.