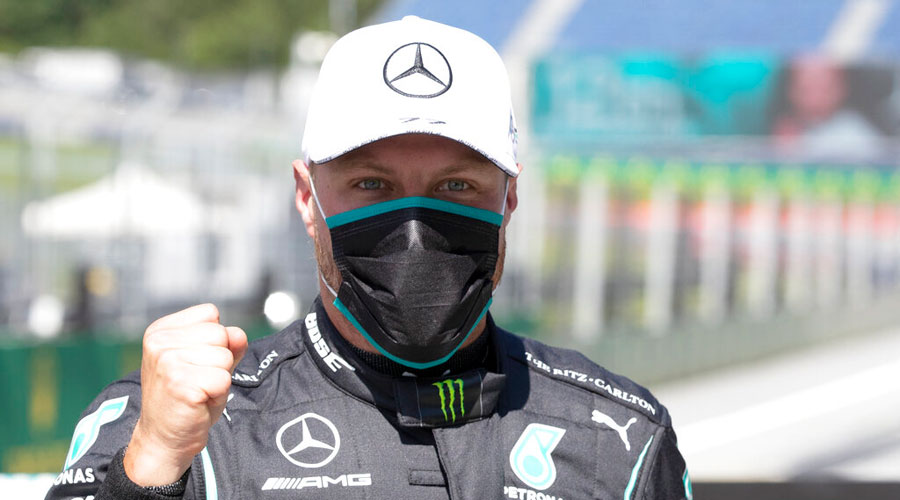 Finland’s Valtteri Bottas will start the Formula One season on pole position after denying Mercedes team-mate and six-time world champion Lewis Hamilton the top slot in Austria on Saturday.

The front-row lockout by Mercedes equalled Ferrari’s record of 65, and the “Black Arrows” were in a private duel at the scenic Red Bull Ring.

“It feels really good, I’ve missed this feeling,” said Bottas of a third career Austrian GP pole after 2017 and 2018, and one secured despite going into the gravel on his final flying lap.

“Our team have done an amazing job, we seem to be in our own league.”

Hamilton’s second place on the grid was under the scanner because of a post-qualifying investigation over yellow flags. But he was cleared as the stewards concluded that he was shown “conflicting signals” of yellow flags and green light at the same time.

He was summoned to the stewards on two counts on Saturday night — allegedly failing to slow for yellow flags on his final lap after polesitter Bottas went off the track, and also running wide off the circuit earlier in Q3 at Turn 10.

Hamilton was found guilty of the second offence and had the 1:03.061 lap time deleted. But as he later went quicker on his final effort — 1:02.951 — his P2 position behind Bottas stands on Sunday’s grid.

Red Bull’s Max Verstappen, winner of the past two races at his team’s home circuit, qualified third but as the sole driver in the top 10 on the medium tyres.  McLaren’s Lando Norris, at 20 the youngest man in the race, will line up an impressive fourth.

Ferrari struggled, however, with four-time champion Sebastian Vettel failing to reach the final phase of qualifying and starting 11th while Charles Leclerc, on pole last year, ended up seventh on the grid.

“I wasn’t so happy with the car, more oversteer in entry than I would like. But we will see, I think tomorrow is a different picture.”

All F1 drivers, teams and personnel have tested negative for Covid-19 ahead of the Austrian Grand Prix, the sport said on Saturday.

Formula One said in a statement that 4,032 tests of drivers, teams and personnel were conducted between June 26 and July 2.

It said aggregated information would be made public every seven days.

Formula One stewards have rejected a Red Bull protest against a new steering system used by champions Mercedes in practice for the season-opening Grand Prix. The action concerned the cars of Hamilton and Bottas, with Red Bull questioning the legality of the Dual Axis Steering (DAS) system.

The stewards, after hours of deliberation in a decision published after midnight in Austria, decided the protest was “not founded”.

Formula One drivers are united in the fight against racism but will each take their own stance ahead of Sunday’s race, the body representing them said in a statement.

Frenchman Romain Grosjean, who races for Haas, said  he planned to take a knee before the start.

Hamilton and Vettel have “Black Lives Matter” on their helmets.