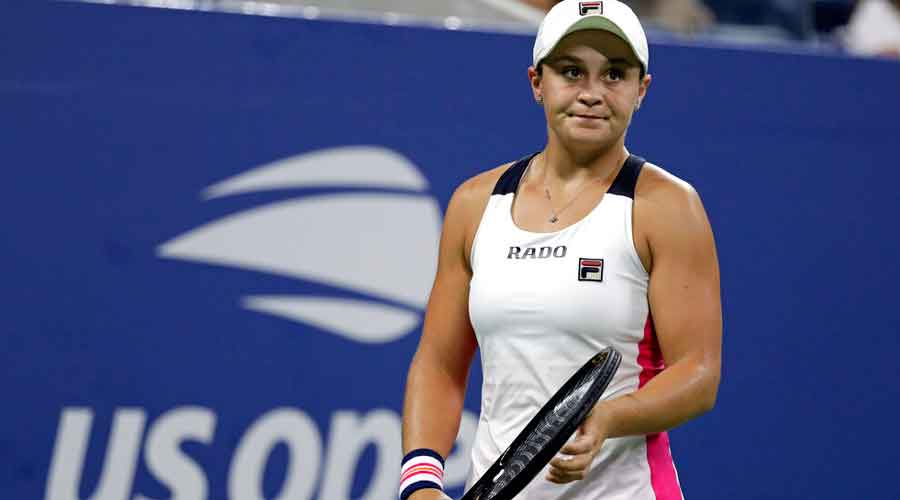 Top seed Ashleigh Barty shrugged off a slump deep in the second set to beat tournament debutant Clara Tauson 6-1, 7-5 and book her place in the third round of the US Open here on Thursday.

Up by a set and a break in the second, Barty looked to be on course to wrap up the contest in style. However, her Danish opponent broke back and Barty had to dig in to finally win the second set at 7-5. Barty hit 33 winners in the one-hour-30-minute match.

A brilliant sun and clear skies greeted Barty and Tauson as they kicked off the action on an Arthur Ashe Stadium court that 12 hours earlier had closed its retractable roof as remnants of Hurricane Ida pounded New York. The impact of the storm was still being felt at the US Open on Thursday, with the start of play delayed by an hour.

World No. 3 Stefanos Tsitsipas fired down a career-high 27 aces on the way to a 6-3, 6-4, 6-7 (4-7), 6-0 win over second-round opponent Adrian Mannarino on Wednesday, but another protracted bathroom break drew jeers from the crowd.

Greek Tsitsipas won all of his first-serve points in the opening set and fired off 53 winners in the match to Mannarino’s 26 and looked set for a straightforward win at Arthur Ashe Stadium before the Frenchman won a third-set tie-break.

Tsitsipas then retreated to the locker room for a bathroom break of more than seven minutes, leaving Mannarino to ask for some balls to be brought out so that he could stay loose ahead of the fourth set.

Tsitsipas, who infuriated Andy Murray in the last round by taking a seven-minute-plus break, was met with a chorus of boos from spectators when he returned.

The 23-year-old said he had done nothing wrong. “I love the fans. But some people don’t understand,” he said. “They haven’t played tennis at a high level to understand how much effort and how difficult it is to do what we are doing. Sometimes we need a short break to do what we have to do.”

The retractable roof on Louis Armstrong Stadium was unable to keep out the rain being blown in sideways by strong winds, which meant Diego Schwartzman’s 7-6 (7-4), 6-3, 6-4 win over Kevin Anderson reached its conclusion at Arthur Ashe Stadium.

No. 2 Aryna Sabalenka powered through with a 6-3, 6-1 win over Tamara Zidansek. Belarusian Sabalenka took a hard fall in the opening set and kept icing her right hand and wrist during changeovers.

Sloane Stephens advanced with a 6-4, 6-2 win over Coco Gauff.