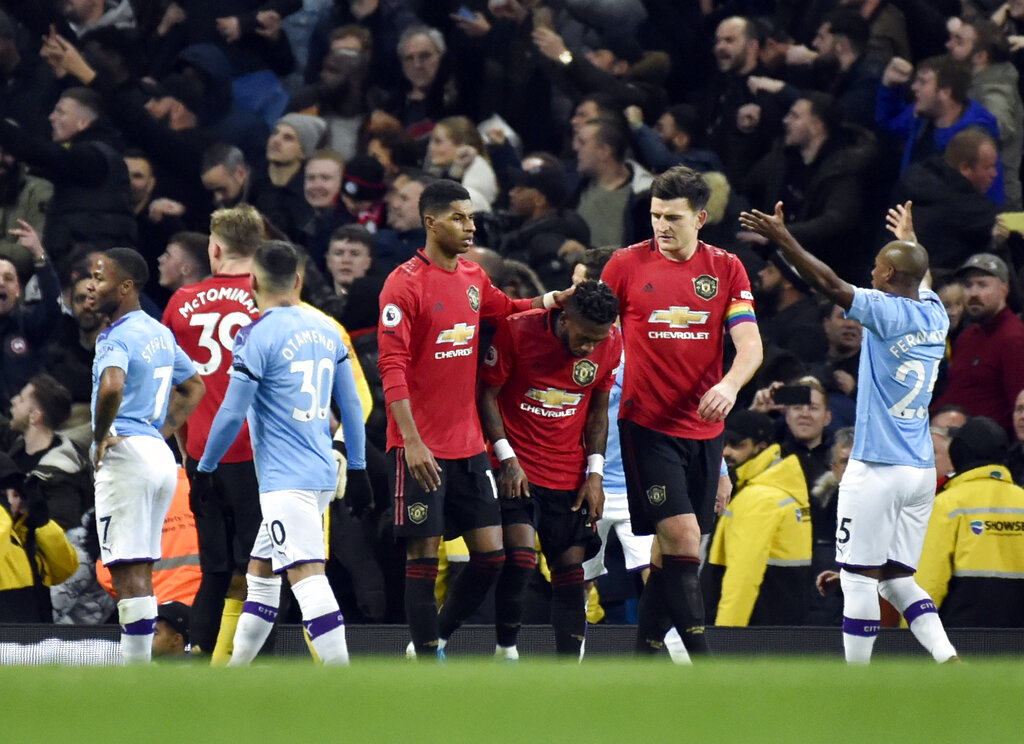 Marcus Rashford and Anthony Martial helped United into an early lead and although Nicolas Otamendi’s late strike did set up a thrilling finale, the visitors held on for arguably the most impressive victory in Ole Gunnar Solskjaer’s 12-month reign so far.

United’s goals came in a breathless opening half-hour at the Etihad Stadium, where they repeatedly carved open City’s creaking back-line to devastating effect.

Rashford opened the scoring from the dreaded spot after he was clumsily knocked over by Bernardo Silva, with the penalty awarded by Video Assistant Referee Michael Oliver.

The in-form England striker, who has now scored 13 goals in his past 14 games for club and country, found the crosspiece moments later, but United did not have to wait long to extend their lead.

Their next attack saw Daniel James find Anthony Martial on the right of the area, and he had space to turn and squeeze his shot inside Ederson’s near post.

City had never trailed by two goals so early in a home league game since Pep Guardiola took charge in 2016 and their fans were left stunned as United’s supporters were delirious at the other end of the stadium.

While the home side finally began to get a grip on the game thereafter, especially in midfield, the damage was already done.

City had repeated penalty appeals for United handballs turned down by referee Anthony Taylor and the VAR before the break, while Gabriel Jesus wastefully headed a Kevin de Bruyne cross wide.

The second half saw United continue to defend deep, but City struggled to create meaningful chances and Otamendi’s header from a Riyad Mahrez corner could not rescue them from their fourth league defeat of the season.

The result means City must recover the biggest points deficit in Premier League history if they are to retain their title, while United have won back-to-back games for the first time this season and now sit just five points off the top four to lift the weight off Solskjaer’s shoulders.

The pressure had been on Solskjaer at the start of the week, but United’s travelling fans sung their back catalogue of odes in support of the Norwegian, as he earned his first win over City as a manager or player.