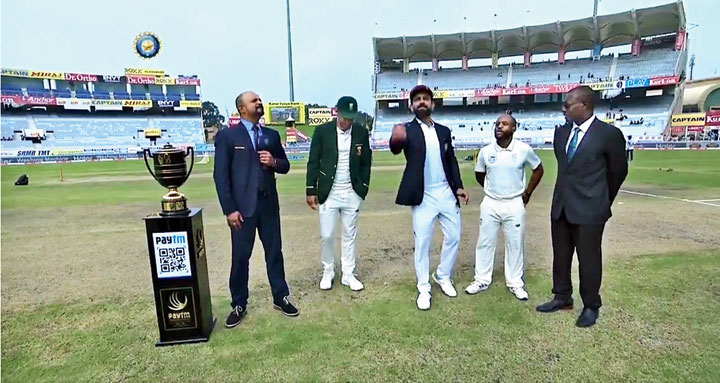 The traditional practice of cricket captains trying their luck through the flip of a coin before a match went for a toss on Saturday morning in Ranchi.

Before the third and final India-South Africa Test began, visiting captain Faf du Plessis, in one of the most bizarre moves ever witnessed on the cricket field, brought team-mate Temba Bavuma along with him for the toss. Why? Apparently because luck didn’t favour Du Plessis in the first two Tests of the series when he lost the toss to India captain Virat Kohli.

The gamble, however, didn’t pay off for Du Plessis as Kohli went on to win the toss yet again. Kohli and Du Plessis shared a laugh after the former elected to bat, but not everyone was impressed with the latter’s weird decision to bring along Bavuma as the proxy captain.

Former South Africa captain Graeme Smith, who is doing commentary for the match on television, said that the incident reflected the mindset of the visitors who have been struggling to get going in the ongoing series.

“It was a quirky moment but for me it was a little bit pathetic,” Smith said on the pre-match show for the official broadcasters.

“It just shows the mindset of the South African side. I didn’t enjoy seeing that. I would rather see the South Africa captain stand there, own his position. You know, they are looking at the wrong places for the reasons they have lost the game. Unfortunately, they haven’t played well enough. Yes, winning the toss in the subcontinent is a nice thing to do, but if you play well enough, you can compete,” he added.

And what did Du Plessis had to say after losing