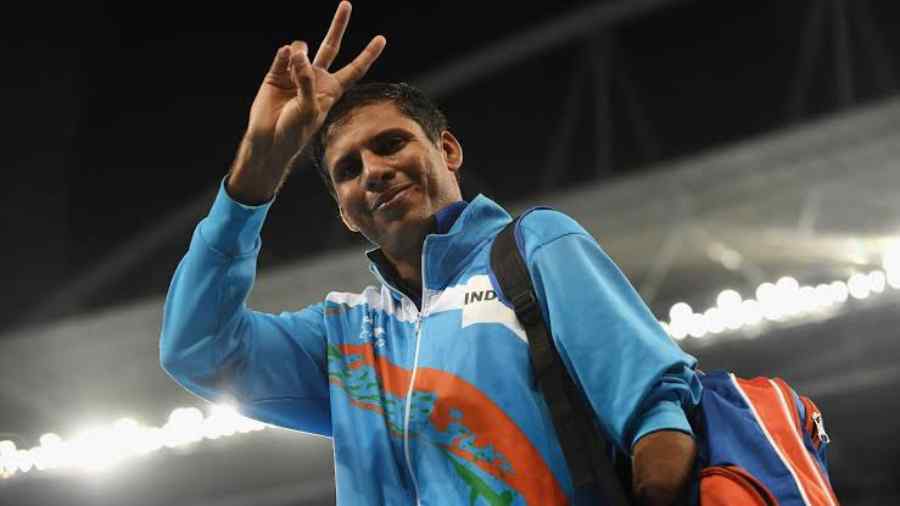 Sundar Singh Gurjar also chipped in with a bronze, finishing behind Jhajharia in the men's javelin throw F46 final.

The F46 classification is for athletes with arm deficiency, impaired muscle power or impaired passive range of movement in arms, with athletes competing in a standing position.

The 40-year-old Jhajahria, already India's greatest Paralympian after winning gold medals in the 2004 and 2016 Games, pulled off a new personal best throw of 64.35m for the silver.

Jhajahria, who lost his left hand after accidentally touching an electric wire while climbing a tree at the age of eight, bettered his own earlier world record (63.97m) but gold winner Sri Lankan Dinesh Priyan Herath Mudiyanselage (67.79m), who set a new world record, was too good for the entire field.

The Jaipur-based Gurjar had won gold in the 2017 and 2019 World Para Athletics Championships. He had also won a silver in the 2018 Jakarta Para Asian Games.

The 24-year-old, a B.Com graduate from New Delhi's Kirorimal College, sent the disc to a best distance of 44.38m in his sixth and last attempt to clinch the silver.

India had won four medals in the 2016 editions while the medal count stands at seven in the ongoing event. On Sunday, India had picked up a silver (high jump) and a bronze (discus throw), which is on hold due to a protest.

Son of an Army man, Kathuniya suffered a paralytic attack at the age of eight which left him with coordination impairments in his limbs. Brazil's defending champion, reigning world champion and world record holder Claudiney Batista dos Santos won the gold with a best throw of 45.59m while Leonardo Diaz Aldana (43.36m) of Cuba took the bronze.

In F56 classification, athletes have full arm and trunk muscle power. Pelvic stability is provided by some to full ability to press the knees together.

He won a bronze medal in the 2019 World Para Athletics Championships in Dubai with a best throw of 42.51m which also booked him a Tokyo berth.

It was during his time at the KMC that his potential was noticed by several coaches and he soon came under the tutelage of Satyapal Singh at the Jawaharlal Nehuru Stadium.

A few years later, he came under the guidance of coach Naval Singh. He created a world record in F36 category in his first ever international competition in 2018 at the Para-athletics Grand Prix in Berlin.