India's medal count has now risen to seven, three more than the four secured at the 2016 Rio Games and in 1984 (Stoke Mandeville/New York) 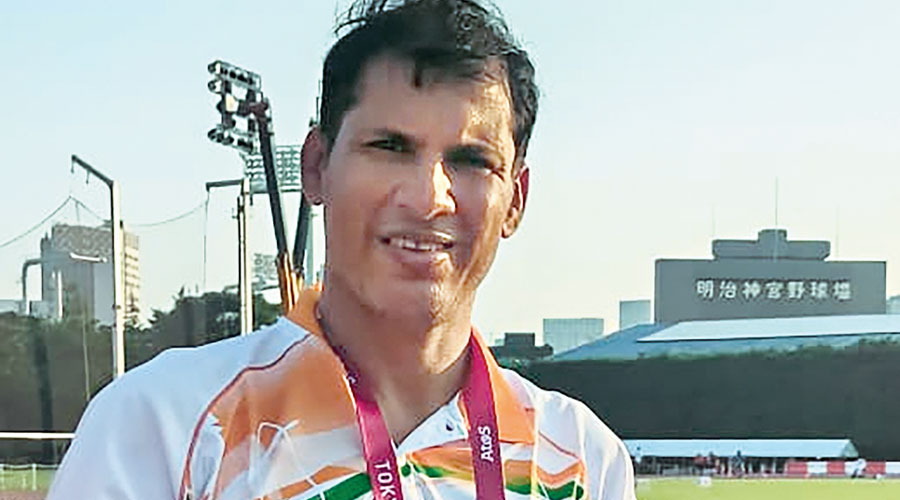 Javelin thrower Devendra Jhajharia’s wish of a hat-trick of gold medals was not fulfilled, but the decorated Paralympian nevertheless earned himself a silver medal from the Tokyo Paralympic Games on Monday.

On a day when India won two gold medals and surpassed their best-ever tally at the Games, discus thrower Yogesh Kathuniya (silver) and Sundar Singh Gujjar, who claimed bronze behind Jhajharia in the men’s javelin throw F46 final, also made the country proud.

India's medal count has now risen to seven, three more than the four secured at the 2016 Rio Games and in 1984 (Stoke Mandeville/New York).

Jhajharia, 40, already India’s greatest Paralympian after winning gold medals in the 2004 and 2016 Games, pulled off a new personal best throw of 64.35m, but that was not good enough to overtake gold winner, Sri Lankan Dinesh Priyan Herath Mudiyanselage (67.79m), who set a new world record.

Jhajharia dedicated his medal to his late father, who passed away last year. “Of course, this medal belongs to the people of the country, but I also want to dedicate this to my late father who had wanted me to win another medal in the Paralympics,” Jhajharia said. “I would not be here if it was not for my father’s efforts.”

The F46 classification is for athletes with arm deficiency, impaired muscle power or impaired passive range of movement in arms, with athletes competing in a standing position.

Earlier, discus thrower Kathuniya clinched a silver medal in the men’s F56 event. The 24-year-old, a BCom graduate, sent the disc to a best distance of 44.38m in his sixth and last attempt to clinch silver.

Kathuniya trained for the Paralympics without a coach. “That was amazing. Winning the silver has given me so much more motivation to get the gold medal at Paris 2024,” he said.

In F56 classification, athletes have full arm and trunk muscle power. Pelvic stability is provided by some to full ability to press the knees together.