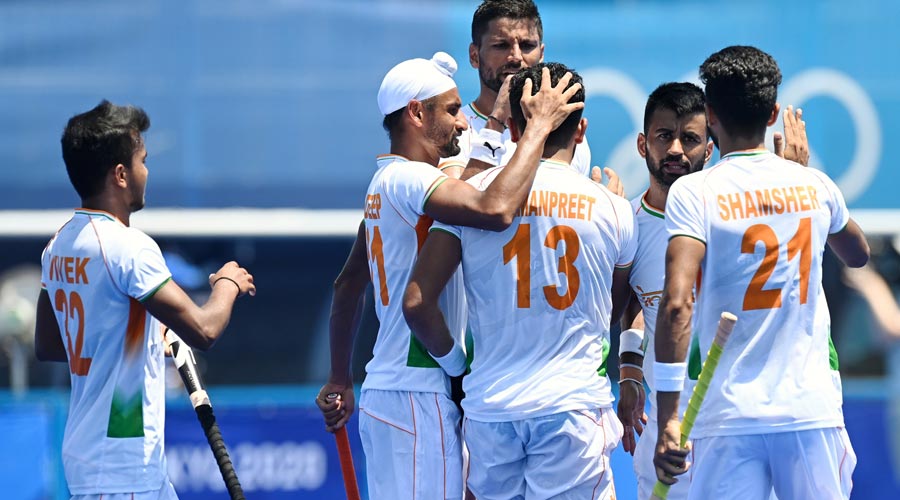 There was good news, and there was bad news for India on Day Six of the Tokyo Olympics.

It started on a great note, with the men's hockey team reaching the quarterfinals by thrashing Rio 2016 gold medallists Argentina 3-1. The mood got even better when Atanu Das won a thriller against two-time Olympic champion Oh Jin-Hyek to enter the pre-quarters of the men's individual event. But the day's major upset involved Mary Kom, as the six-time world champion lost to Colombia's Ingrit Valencia in a fiercely fought showdown.

Here's a round-up of all that happened today, from boxing to swimming:

The Indian archer proved a point by knocking out two-time Olympic champion Oh Jin-Hyek to join his wife Deepika Kumari in individual pre-quarterfinals of the Tokyo Olympics. Das, who had lost his place to rookie Pravin Jadhav in the fancied mixed team event after slipping to 35th place in the ranking round on Friday, showed nerves of steel to edge out the legendary Korean in a one-arrow shoot-off. The individual Olympic champion from London 2012 and a team gold medallist here, Oh started the shoot-off with a 9 as Das delivered a perfect 10, hitting the bull's eye to seal the issue 6-5 (10-9) in extraordinary fashion. Earlier in the day, Das saw off a tough challenge from Chinese Taipei's Deng Yu-Cheng to win 6-4 from being locked 4-4.

PV Sindhu sailed into the women's singles quarterfinals at the Tokyo Olympics with a straight-game triumph over Denmark's Mia Blichfeldt on Thursday. The 26-year-old Indian, who won a silver in the 2016 Rio Olympics, completed a 21-15 21-13 win over 13th seed Blichfeldt in a 41-minute match. "I started off well in the first game but around 15-16 I gave a couple of points because I was rushing in my defence. My coach was telling me that I was playing the wrong way and I realised that and I immediately changed my tactics and completed the first game," Sindhu told media after the match.

India's first super heavyweight (+91kg) Satish Kumar eased into the quarterfinals of his debut Games, defeating Jamaica's Ricardo Brown in his opening bout. In the battle of the debutants, the 32-year-old Satish prevailed 4-1, a comfortable win for him despite the split verdict. The two-time Asian Championships bronze-winner Indian, who has been a multiple-time national champion, was helped by Brown's poor footwork throughout the bout though he did end up sustaining two cuts -- one on his forehead and the other on his chin. And, six-time world champion MC Mary Kom's (51kg) pursuit of a second Olympic medal ended in the pre-quarterfinals as she went down to 2016 edition's bronze-medallist Ingrit Valencia in a fiercely fought showdown. The 38-year-old legend, who is a multiple-time Asian champion and a bronze-winner from the 2012 London olympics, lost 2-3 to the Colombian, giving it her all in what would now be her final Olympic bout.

Anirban Lahiri off to solid start

Playing in his second Olympics, India's Anirban Lahiri got off to a solid start, carding a 4-under 67 in the first round to be placed tied 8th at the weather-hit Tokyo Games golf competition at the Kasumigaseki Country Club. The former Asian Tour No. 1 Hero Lahiri had six birdies against two bogeys and was shared the 8th spot with Paul Casey (Great Britain) Alex Noren (Sweden) and Sebastian Munoz (Mexico) at the end of the day. The other Indian in fray, Udayan Mane, who made the field of 60 at a late stage, had a fine start at 2-under after eight holes. But he finished at 5-over 76 and was last on the leader-board. Play was interrupted in between due to inclement weather when there was a threat of lightning.

The Indian men's hockey team stormed into the quarterfinals ith a comprehensive 3-1 victory over defending champions Argentina, scoring two goals in the final two minutes of its penultimate pool match. After goal-less first two quarters, India broke the deadlock in the 43rd minute through Varun Kumar before Vivek Sagar Prasad (58th) and Harmanpreet Singh (59th) struck in the closing minutes of the match to seal the contest. It was India's third win in Pool A at the Oi Hockey Stadium.

All over for Arjun Lal, Arvind Singh

Indian rowers Arjun Lal Jat and Arvind Singh ended their Tokyo Games campaign in 11th position in the men's lightweight double sculls event, the best ever result for the country in the Olympics. The Indian pair clocked 6:29.66 to finish fifth in the Final B, which was not a medal round, and end at 11th overall at the Sea Forest Waterway. Ireland, Germany and Italy won the gold, silver and bronze respectively after the Final A race later in the day.

Indian sailing pair of KC Ganapathy and Varun Thakkar finished a creditable seventh in one of the two races in men's skiff 49er but still languished at 17th position overall. Ganapathy and Thakkar ended at 16th in Race 5 before pulling off a seventh-place finish in the next to occupy 17th place out of 19 competitors with 76 net points. Six races and medal round still remain in the competition at Enoshima Yacht Harbour. Another Indian, Vishnu Saravanan was at 23rd position overall out of 35 sailors in the laser event with 138 net points after finishing 27th and 23rd in Race 7 and 8. Two more races and medal round remain in the event. Nethra Kumanan also continued her disappointing form as she was placed 31st with 176 net points out of 44 sailors in the women's laser radial after finishing 22nd and 20th in the seventh and eighth races.

Indian shooters Manu Bhaker and Rahi Sarnobat were placed 5th and 25th respectively in the women's 25m pistol qualification (precision). In a field of 44 shooters, Bhaker scored 292 after 30 shots on target in the precision round while compatriot Sarnobat aggregated 287 in the qualifications at the Asaka Shooting Range. The second stage of the qualification -- the rapid round -- will take place on Friday. The top-8 shooters in the qualification will enter the final. Serbia's Zorana Arunovic led the pack with 296 points, followed by Greece's Anna Korakaki who has 294.

Swimmer Sajan Prakash finished second in his Heat but that was not enough to advance the semifinals of the men's 100m butterfly event as India's underwhelming campaign. Prakash, who also competed in the 2016 Rio Olympics, finished second in the second-slowest heat with a time of 53.45s. The cut was placed at 51.74s. The 27-year-old from Kerala, finished 46th among 55 swimmers. The top-16 progressed to the semifinals. All three Indian swimmers -- Prakash, Srihari Nataraj, and Maana Patel -- head home after disappointing show, failing to even match their personal best times in their main events.