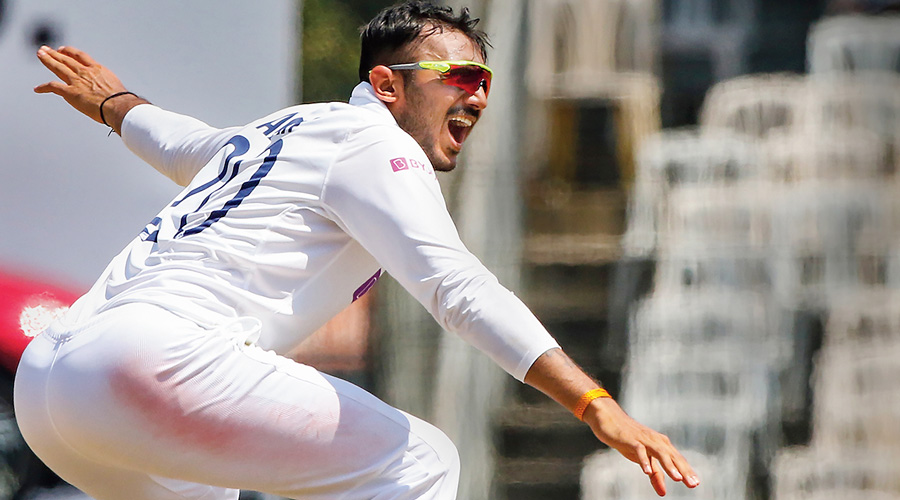 Axar Patel on Day IV of the second Test against England on Tuesday when he became the ninth Indian bowler to claim a five-for on debut.
PTI photo
Sayak Banerjee   |   Calcutta   |   Published 17.02.21, 01:35 AM

England had no answers to the whirlpool of spin that India unleashed on them, their batsmen, like clueless amateurs on a professional pitch, surrendered to fate and, in the end, after three-and-a-half days of cricket, the hosts emerged convincing winners.

By the end of Day III’s play, an Indian victory seemed a formality. The fourth day’s play unfolded according to the script, with India wrapping things up in just over a session’s time to level the four-match series with a massive 317-run win at the Chepauk on Thursday.

All eyes were on local lad Ravichandran Ashwin in anticipation of the rare feat of a century and a 10-wicket haul in the same match. Ashwin did add to his collection of wickets, but finished with a match-tally of eight as it was left-armer Axar Patel who took three of the remaining seven England wickets to finish with a five-for in the second innings and cap off a memorable Test debut.

Importantly, Axar got the prized scalp of rival captain Joe Root, whom he could have dismissed the previous evening itself with a bit of fortune. Root looked like a sitting duck to the awkward bounce Axar extracted, with Ajinkya Rahane taking an easy catch at slip.

Kuldeep Yadav too had something in his wickets column, striking twice as England were bundled for 164 after yet another insipid showing with the bat.

As for the pitch, it certainly can be termed bowler-friendly, but as Rohit Sharma, Rahane, Rishabh Pant, Virat Kohli and then Ashwin showed, all that a batsman needed to score runs was better application and a positive mindset. Nothing more.

In other words, England's batting disaster boils down to their faulty technique against spin, and the pitch has nothing to do with that.

“Both teams had to apply themselves, and that’s what you want in Test cricket, whether you’re playing on spinning tracks or on seaming tracks. Both teams should be in the game from the first session onwards, and that was exactly the case on this pitch,” Kohli summed it up at the post-match presentation.

“Our application with the bat was outstanding in this game. The conditions were challenging for both sides, but we showed more application, grit and determination. We didn’t panic out there, looking at the amount of turn and bounce on that pitch.

“We trusted our defence and scored 600-plus runs in total. Then we knew our bowlers are going to do the job in our home conditions. So yeah, it turned out to be a perfect game for us.”

England could have tweaked their batting order a bit just to surprise a dominant India. They could have promoted Moeen Ali up the order in place of Ben Stokes, who looked absolutely clueless right through. Moeen, batting at No.9, made 43 off 18 balls.

With the series square, both teams now move on to Ahmedabad for the remaining two Tests, the first of which is a pink-ball Day-Night encounter beginning February 24 at the refurbished Motera Stadium.

The Indian camp already seems to have begun preparations for the third Test as soon after the second Test got over, Jasprit Bumrah was seen bowling for a while with the pink SG ball under the supervision of bowling coach Bharat Arun and chief selector Chetan Sharma.

Nothing is cast in stone, but India will go into the next match with much more confidence. England, who believe in rotation but are not really comfortable when the ball spins, will have to redraw their strategies.

Ravichandran Ashwin recorded the second instance of getting a century and an 8-wkt haul in the same Test. No other Indian has done it even once. Overall, 16 players have achieved the same feat in Test cricket. Ian Botham has done it on three occasions, Ashwin twice and the other 14 have done it once.

Axar Patel (5/60) became the ninth Indian bowler to claim a five-wicket haul on Test debut. Narendra Hirwani did it twice in the same match. Axar joins Dilip Doshi as the second left-arm spinner on the list.

The Chennai win is Virat Kohli’s 21st Test victory at home in 28 matches. He has now equalled MS Dhoni’s record tally of 21, which came in 30 matches.
India’s winning margin of 317 runs is their fifth biggest Test victory in terms of runs. It is their highest by way of runs against England, bettering the previous best of 279 runs in Leeds in 1986.