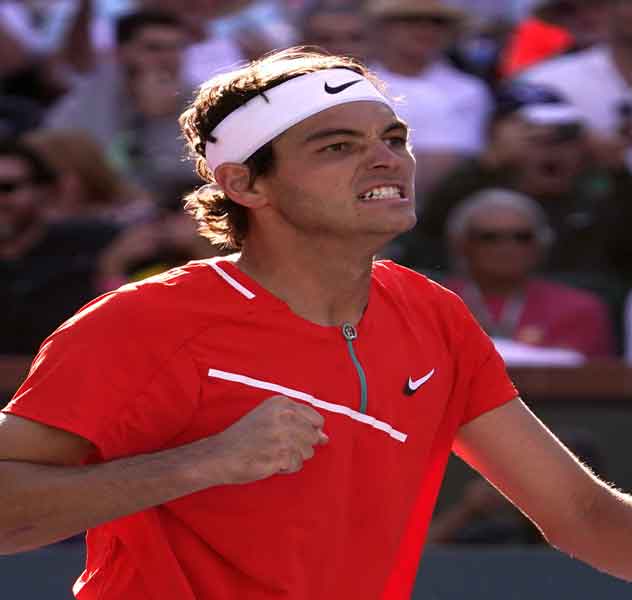 Taylor Fritz holds the championship trophy after defeating Rafael Nadal in the men’s final at the Indian Wells Tennis Garden on Sunday.
Twitter
Reuters   |   Published 22.03.22, 03:53 AM

Taylor Fritz battled through excruciating pain to bring Rafa Nadal’s 20-match winning run to an end with a 6-3, 7-6(5) victory in the Indian Wells final on Sunday, becoming the first American to lift the title since Andre Agassi over two decades ago.

Home favourite Fritz gave fans what they came to see — an heroic effort and an American winner — denying Nadal what would have been his fourth title of the season and a record-equalling 37 ATP Masters 1000 championships.

Struggling with an injured ankle, Fritz said after collecting his second career title he had had doubts he could even take to the court and had never before experienced such pain prior to a match.

But the 24-year-old American decided to gut it out and was rewarded with the biggest win of his career, fighting off the 21-time grand slam winner.

“This is just one of those childhood dreams you just think would never come true,” said Fritz. “I can’t even describe how ridiculous itis how I could play today (Sunday).

“I have never experienced worse pain in my life before a match.

“If I knew it was going to be that bad, I wouldn’t have come out here. I took a couple of change-of-direction steps and screamed and honestly I was trying to act tough because I had cameras on me.

“We did a lot of work leading up to the match and I went through a rollercoaster of emotions before the match thinking there’s no way I could possibly play today.”

Both players had fitness concerns coming into the final.

While Fritz was struggling with an ankle problem, Nadal was dealing with a chest issue he picked up during an epic three-set semi-final battle with 18-year-old compatriot Carlos Alcaraz.

“When I’m breathing, when I’m moving, it’s like a needle all the time inside. I get dizzy a little bit because it’s painful,” Nadal said.

“It’s a kind of pain that limits me a lot. It’s not only about pain, I don’t feel very well because it affects my breathing.

“More than sadness for the loss, (it’s) something that I accepted immediately and even before the match ended... I’m suffering a little bit, honestly.”

Nadal said last week he would not compete at the Miami Open, which immediately follows the Indian Wells tournament.