The Afghans had Mujeeb Ur Rahman back in the XI, plotting to unleash him along with spin ace Rashid Khan to exploit NZ’s weaknesses against the turning ball 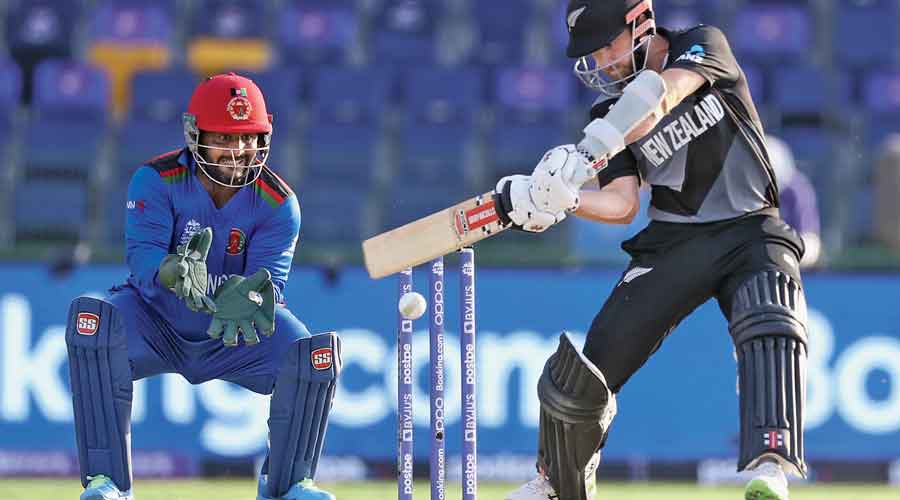 When Devon Conway punched the ball down long on for a single off Gulbadin Naib off the first ball of the 19th over of the New Zealand innings in Abu Dhabi on Sunday, it sure broke the hearts of a billion Indian fans.

That run not just sealed a comfortable eight-wicket win for New Zealand over Afghanistan, it also took the Black Caps to the semi-finals of this T20 World Cup, thereby dashing India’s hopes of staying alive in the competition.

As all Indian fans around the world prayed and wished for an Afghan victory, Mohammad Nabi won the toss and opted to bat first at the Sheikh Zayed Cricket Stadium. Batting first irrespective of the conditions is how the Afghans like it. But the New Zealand bowlers were on the money right from the onset, and with Trent Boult (3/17), Tim Southee (2/24) and Adam Milne (1/17) firing, they limited Afghanistan to a modest 124/8 on a surface that looked quite good for batting.

The job was almost half done when the New Zealand pace trio removed the Afghanistan top order with just 19 runs on the board by the sixth over. Had it not been for Najibullah Zadran’s counter-attacking 48-ball 73, Afghanistan could well have struggled to reach even three figures.

Zadran, who hit six boundaries and three maximums in his well-compiled knock that had a lot of character in it, was also involved in a 59-run fifth-wicket stand with Nabi that gave some steam to the Afghanistan total, particularly when the innings was going nowhere at 56/4 in the 10th over.

New Zealand’s ground fielding too was exemplary, underlined by Daryl Mitchell’s acrobatic stuff at the deep that denied the Afghans a certain boundary in the death overs, while some fine catches were also taken in the deep.

The Afghans had Mujeeb Ur Rahman back in the XI, plotting to unleash him along with spin ace Rashid Khan to exploit New Zealand’s weaknesses against the turning ball. But the target for the Black Caps was far from challenging and the pitch too didn’t deteriorate at all.

Yet, Mujeeb and Rashid tried their best to make a match of it, dismissing openers Mitchell and Martin Guptill as New Zealand looked to be a bit under pressure when they needed 62 off the last nine overs.

But if the calm and cool Kane Williamson (40 not out) gets his timing and placement right, it often rubs on to the batsman at the other end as well. Devon Conway (36 not out), after a scratchy start, got into his groove and together with Williamson, stitched an unbroken partnership of 68 that took New Zealand home with 11 balls remaining.