If India go with three pacers in their tournament opener, fielding Bhuvneshwar along with Bumrah and Shami remains a possibility 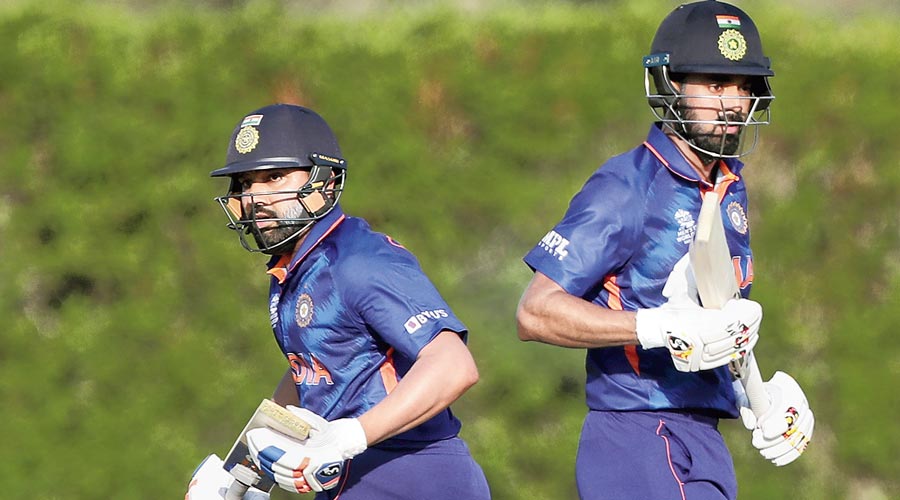 Spoilt for choice. That would be apt to say after India had another fine outing in their final warm-up game in which they comfortably beat Australia by eight wickets with 13 balls to spare at the ICC academy ground in Dubai on Wednesday.

The other day versus England, in their first warm-up game, KL Rahul, Ishan Kishan and Rishabh Pant were among runs, while Bhuvneshwar Kumar’s bowling turned out to be a matter of concern. But on this occasion, almost all the bowlers were on the money, making Australia work really hard for their total of 152/5.

Bhuvneshwar, who was wicketless and carted for 54 off his four overs by the English batsmen, was far more accurate against the Aussies, bowling very few loose deliveries and giving set batsmen Steve Smith and Marcus Stoinis little room to free their arms at the death. Off his four overs, the pacer gave away just 27 runs with the wicket of Smith.

Alongside Bhuvneshwar, Shardul Thakur was the only regular pacer to bowl in this game as India, led by Rohit Sharma, rested both Jasprit Bumrah and Mohammed Shami. Shardul didn’t have a great time out in the middle, though, conceding 30 off his three overs without any wicket.

So if India go with three pacers in their tournament opener versus Pakistan on Sunday, fielding Bhuvneshwar along with Bumrah and Shami remains a possibility.

Among the spinners, Ravichandran Ashwin had a pretty good time with figures of 2/8 off his two overs, dismissing David Warner and Mitchell Marsh off successive balls.

Hardik Pandya didn’t bowl on Wednesday, too. “Hardik is coming along pretty well, but it’ll be a while before he will start to bowl. He hasn’t started bowling, but he should be ready by the start of the tournament,” Rohit said at the toss.

In reply, Rahul’s clean hitting continued, Rohit (60) too warmed up in style and Suryakumar Yadav, promoted up to No.3, made fine use of the opportunity as he remained unbeaten on 38 off just 27 balls.

Importantly, he was back to his improvising best, which was missing in the second leg of this IPL.

The focus will now be on the No.4 slot. Surya or Kishan? Virat Kohli and his advisers have some thinking to do.