The world has changed a lot over the last couple of years, thanks to the pandemic, but that just doesn’t stop Morgan & Williamson from being reminded about July 14, 2019 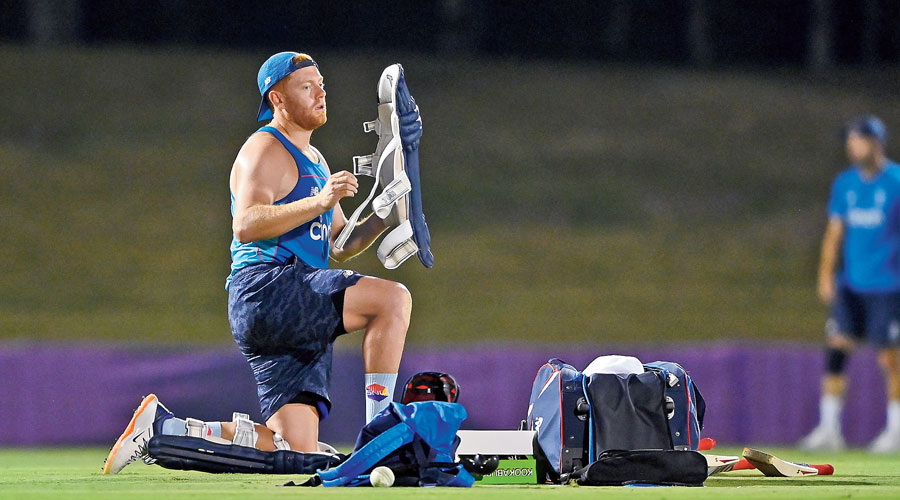 England’s Jonny Bairstow pads up during a training session at the ICC Academy in Dubai on Tuesday, the eve of their T20 World Cup semi-final against New Zealand.
Getty Images
Sayak Banerjee   |   Published 10.11.21, 02:24 AM

Every time Eoin Morgan and Kane Williamson face off, it seems that the contest will be viewed through the prism of the 2019 (50-over) World Cup final.

Even during the Kolkata Knight Riders-Sunrisers Hyderabad game in this year’s IPL, both of them faced questions regarding that unforgettable final. And on the eve of the first semi-final of this T20 World Cup, which will also be the first time these two sides clash in an ICC event since the 2019 final, Morgan and Williamson invariably had to face questions related to that classic contest from two years back in which England beat New Zealand on boundary count after the match and Super Over were tied.

The world has changed a lot over the last couple of years, thanks to the Covid-19 pandemic, but that just doesn’t stop Morgan and Williamson from being reminded about July 14, 2019.

“We know how consistent New Zealand have been over the last number of World Cups, not only the recent ones but you look further and beyond Kane’s role as captain.

and the final consistently for some time now,” England captain Morgan said at a news conference on the eve of the semi-final.

It wouldn’t be wrong to say that England have tried to replicate the aggressive brand of white-ball cricket Williamson’s predecessor Brendon McCullum represented. That approach has yielded Morgan and Co. success.

Even without pacer Tymal Mills and opener Jason Roy, the current England side comprises batsmen and bowlers who are match-winners.

The Black Caps, on the other hand, haven’t been too successful against England in limited-overs cricket over the last six years or so, but as Williamson says, the “fickle” nature of the T20 format demands both teams put their best foot forward in Wednesday’s semi-final clash in Abu Dhabi.

“Both teams will need to try and utilise what they have to the best of their abilities, and try and play their best cricket.

“You turn up on the day and given the fickle nature of this format, both teams will look to put their best foot forward and what will be will be at the end of it,” Williamson, whose elbow has been “a bit of a challenge”, explained.

One hopes the pitch at the Sheikh Zayed Cricket Stadium, despite the demise of its chief curator, will continue to be a sporting one and ideal for T20 cricket. New Zealand, though, don’t really need to think much about their combination as their three-pacer-two-spinner strategy has paid off so far in the competition.

But Morgan needs to put his thinking cap on. Who will come in place of Roy? Will it be left-arm quick David Willey to reduce the workload on the likes of Chris Woakes, Chris Jordan and Adil Rashid on what’s expected to be a batsman-friendly track?

Or, will Sam Billings step in to add further depth to England’s batting?

While England try to get their combination right, New Zealand will see Roy’s absence as an opportunity to punch holes in England’s top order. Trent Boult, Tim Southee and Adam Milne will be ready with their plans.

England will bank on Jos Buttler to spoil all such plans from the Black Caps.